Out and about: See Canyon Trail
1,700 foot climb features flowers, wildlife and views 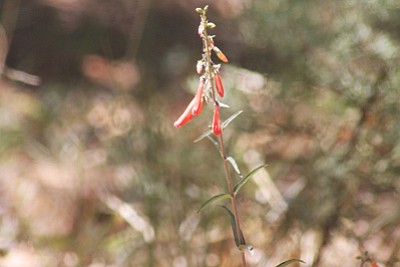 A wildflower grows along the See Canyon Trail. Photo/Stan Bindell

PAYSON, Ariz.- Most mountain trails mean you climb to the top, stop and then go back down. Humphreys, Bill Williams and Kendrick are all that way.

The See Canyon Trail, just east of Payson, is a bit different. The trail reaches its apex at the top of the mountain, but at that point it connects with many other trails.

The See Canyon Trail climbs about 1,700 feet from 6,183 feet to 7,856 feet. Arizona Highways rates the seven mile round-trip hike as moderate, although some folks would consider a 1,700 foot climb more than that. But those who want more mileage can hook into other trails.

The trail is a good one and the switchbacks make the climb as relaxing as a climb can get.

The trail begins by going through some shady trees, mostly ponderosa pines, but quickly runs into the cascading waters of Christopher Creek. Even before the rains, the yellow Rocky Mountain Columbine grew around the creek.

Shortly into the hike, more flowers, butterflies and lizards were greeting hikers as well. The hike has a lot of undergrowth including grass and ferns, although the ferns weren't as plentiful as those on the Barbershop or Houston Brothers Trails. Some of the manzanitas were larger than usual.

Some interesting alligator junipers dot the trail, one appeared to be growing on top of a boulder.

As hikers make their way up the trail they will run into maple trees, making this hike a good one in the fall when the leaves change colors. Oaks and occasional aspens are also found along the way.

Further up the trail signs of the 2007 Promontory Fire can be seen, but everything is slowly starting to grow back.

See Canyon Trail is also part of the 291 trail system. That's important because about two miles in, there is a tree marked with 291, but it doesn't tell the hiker which way to go. You can either go right or go straight up. The tendency might be to go toward the right because it is the easier way. But that is also the wrong way and the trail doesn't go much more than a mile or two in that direction.

The straight path is the one that takes the hiker to the switchbacks and up the mountain. The trail's crest comes out on Forest Road 9350 which has a campground in Apache-Sitgreaves National Forest.

Directly across from the See Canyon Trail at the top of the mountain, the Drew Canyon Trail begins. If hikers keep making right turns this makes a loop back to the same spot. About three-quarters of a mile down to the left, hikers can pick up the Aspen Trail, which strangely had few aspen trees. The Aspen Trail eventually hooks into the long General Crook Trail.

The Carr Lake Trailhead is also in the area, but hard to find. Neither a Forest Service worker nor the campground host were able to direct the hikers to the lake, which they said was probably dry. Maybe nobody knows where Carr Lake is because it's not on the map. The Rim Lakes Recreation Area Map shows the location of Bear Canyon Lake, Woods Canyon Lake and Willow Springs Lake. It also shows the Carr Lake Trail system, but no Carr Lake. It all seems a bit odd.

Some of views from the top of the mountain are breathtaking as hikers can see many of the mountains off in the distance and the green forest right below. The campers were cool at this 7,856 foot elevation.