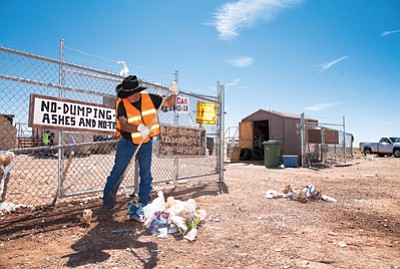 David Webster rakes up trash at the Cameron Transfer Station during a community cleanup day July 10. The station is closed. Chapter officials said they can’t afford to keep the station open and need help from the Navajo Nation. Ryan Williams/NHO

CAMERON, Ariz. - While a cleanup of the trash at the Cameron Transfer Station took place July 10, the trash problem in Cameron and at other transfer stations across the Navajo Nation lingers.

The Navajo Nation delivered two large trash bins to the Cameron Chapter in the morning just in time for the cleanup, which started at 5 a.m. The bins were full by 10 a.m. with more trash to clean up.

Tso said numerous calls were placed to the Nation to confirm the bins would be there in time on the correct day, a symptom of some of the issues that are facing the chapters.

He said bureaucracy, paperwork and waiting for money from Window Rock combined to delay the cleanup of the transfer station, a problem facing other chapters, as well.

"We're not the only chapter facing this type of crisis," Tso said. "Ours was just so visible from the highway."

"To me, sadly, it is really the Division of Community Development that basically wanted out of it altogether," Phelps said. "I think somehow they envision that the chapters are going to magically be able to find funds and manage their own transfer stations and their own solid waste programs. Maybe the larger chapters can handle that... for the smaller chapters this is a nightmare for all of us."

"These were all county transfer stations," Phelps said. "They were all part of the county agreement and the rug got pulled out from under all of them."

Tso said it is a problem when there is no money in the budget allotted to them by Window Rock for trash pickup.

"We get money from central government but it is all ear marked," Tso said. "That is what people need to understand, when chapter money comes to the chapter it is all ear marked for housing, scholarships and we can't take money out of it for anything else."

Regardless, Tso acknowledged that the chapter is responsible for the transfer station even though people disregarded the signs and illegally dumped at the site.

"We did this to ourselves," he said. "I put tires across the road hoping that people would get the hint that it is closed but the trash itself was visible from the road and people made their own road and went around."

Also posted and ignored were rules about what people could dump and what they couldn't. The pile of tires that Tso is trying to figure out what to do with sat next to oil and batteries that were also found during the cleanup. Tso said it will cost $5 per tire to get rid of the tires in Flagstaff.

"We give out information about where people can take those things but people just don't want to do it," Tso said.

The transfer station is currently closed while chapter officials figure out both temporary and permanent solutions to the problem. A temporary station within sight of the chapter house that can be closely monitored is one option.

"My worst fear now is that now people will see it cleaned up and the whole process of [illegal dumping] will start up again," Tso said.

He added that not all the trash that was dumped came from the Cameron community.

"A lot of complaints from the locals is that this isn't our trash," Tso said. "People are bringing trash from different parts of the reservation and this is why [the bins] get filled and it's not local."

Nona Johnson, a lifetime resident of Cameron, volunteered to help cleanup the transfer station and said that Cameron chapter officials should not be blamed.

"We don't need to blame our elected officials," Johnson said. "I work with them closely every day. It's a community effort to clean up. (Community members) were told not to dispose of their trash there."

She also said she has seen people dumping at the transfer station who are not part of the community of Cameron.

"We've seen them," Johnson said. "All the way from Shonto and Kaibeto."

In the meantime, Tuba City has a transfer station that is up and running and Flagstaff is another alternative.

While until now the transfer station was free for Cameron residents to dump their trash, Tso said that they may have to start charging a fee in the future.

He said Tuba City pays $30,000 per month to remove their trash, not including paying employees. Because the Tuba City Chapter is certified, unlike Cameron, it is able to collect tax money from businesses on the reservation. But even Tuba City is thinking about charging for trash removal too.

Adding to the problem are federal requirements from the Occupational Health and Safety Administration (OSHA) for employee safety.

"We were told by OSHA our employee doesn't have a decent shelter, no air conditioning, no water, no restroom so you can't have anybody working here," Tso said, adding that Cameron also has a problem with employee turnover, which means that each employee needs to be certified again.

Tso said involvement in chapter meetings is important for Cameron residents and without community participation nothing can get done. The special meeting to authorize the cleanup was posted four days before the meeting took place.

"I had to wait three hours to get 25 people, which is our quorum, to make sure we could even vote on it. So, three hours of me sitting there, with our vice president, secretary and other officials, waiting there so we could get that quorum so we can pass the budget to do this cleanup," Tso said.

He added that others are welcome to run for election, too, noting that he was one of the people who used to criticize the chapter for not doing enough. But the responsibility has been eye opening for him.

"If anybody thinks they can do a better job, I will be glad to step aside," Tso said. "Now I know how difficult and how slow things move. As a chapter president my power is limited as well."