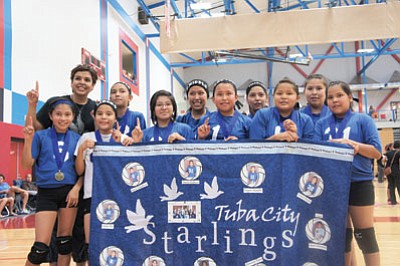 The Starlings 12 year old team played seven matches over the weekend and won all of them. Last year, the Starlings was runner up in the same tournament. The older team with 12- to 14-year-old players, were runners up this year, while the younger team with players from 8 to 12 years old, came in ninth.

Head coach April Clairmont said the difference between this year and last year was the leadership and skills that the players displayed and the length of time they have been playing together.

"Five of the girls who are on this current team have been playing together for three to four years with a handful coming up from the younger team," Clairmont said.

She also believes that starting the players early when they are eight and building their volleyball foundation is what helps put together winning teams.

"That is where I find my passion," Clairmont said. "I find my passion in starting them early and keeping them together and building the basic foundations for volleyball."

She also said that some players helped lead the team this year and were the reason the team did so well.

Jayda Chee came out hitting, blocked a couple of shots and jump served in a way that made everything fall together for the "Her leadership role has developed in such a way that she can tell the girls, 'ok, let's do this, let's play together,'" Clairmont said.

She said the team's two setters, Gracie Henderson and Devynn Hatathlie, were instrumental in both leadership and keeping the players on track.

The team's Libero, who is a defensive specialist in volleyball, was Gracee Curley.

"She's the one who comes in and plays defense, chases the ball, she was just all over the place digging balls," Clairmont said.

"Those are the four girls who really showed their leadership and came out and when things went bad for a little bit said, 'ok we can do this, we can pull it together.' I've got to give credit to them," she added.

While most of the teams the Starlings beat in the tournament were pretty easy wins for the Starlings, last year's champions COLA, City of LA, were more difficult. While Cola gave the Starlings competition, the Starlings still won in two games.

"Once you give them a good set, it comes straight down," Clairmont said. "If we were to fall apart and give it to them then they probably would have beaten us."

She said that the Starlings' wins showed the character of the team and how much they wanted to win this year, but perserverance was also something the girls learned.

"We're not only there to play volleyball," Clairmont said. "We're there to learn teamwork, intensity and how to win and fill those types of characteristics."

The Starlings program, called Starling Volleyball, is a non-profit organization. With the help of Harlan Barlow, head coach for the Tuba City Warriors, the program has doubled in size this year, up from 14 players last year to 30 this year. Barlow volunteers his time in his off season to help out the Starlings.

"He volunteered his time to take the older girls," Clairmont said. "In a way we're building this and we are the feeder system into the high school."

While a regular school sports program normally practices right after school, Clairmont finds she needs to be more creative with scheduling.

"I have to schedule practices at least once or twice a week, maybe an hour to two hours and it has to not be in conflict with the regular school sports because it is during the school season," she said.

Clairmont gives a lot of credit to the coaching staff who volunteer their time, which includes Barlow and Lorna Etsitty.

"I can't thank them enough because it is a lot of work for us," she said. "Without them our program wouldn't be so successful."

While it is an investment in time for both the kids in the club and for the coaches, Clairmont said the girls love it and it is free unlike other clubs.

"We don't charge like some clubs," Clairmont said. "The Starlings program goal is to get as many kids as we can and hopefully I can provide enough coaching to where we can open it up to everybody."

One of the most important things, Clairmont said, is the chance to see the players grow and improve in each year that she teaches them.

"It's amazing to be their coach for these three years and see them grow into these young women who love the game of volleyball and who just go out there and leave everything on the court," Clairmont said. "That's why I love what I do."