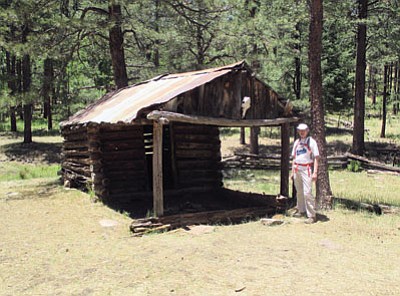 A hiker stands in front of the Pinchot Cabin along the Houston Brothers Trail. Photo/Stan Bindell

PAYSON, Ariz. - How can heaven be improved? Well, wait until after it rains.

Last year, this hiker was on the Houston Brothers Trail in August after the rains so the trail was covered with flowers and butterflies. This year, I made the mistake of going before the rains. The first two drainages were dry, meaning the sunflowers hadn't bloomed and the butterflies were scarce.

But not to fret because beautiful orange flowers were coming up and the further into the hike the more that flowers and butterflies appeared. Maybe not as many as in previous years, but certainly enough to draw smiles.

The Houston Brothers Trail is one of the best summer hikes in Arizona because of its altitude, shade, running streams and a feeling of wilderness.

The drive into the trailhead is another plus as motorists take Rim Road 300 that goes along the Mogollon Rim. The 16-mile ride on this graded road starts covered by pine trees so there is plenty of shade, but before long the panoramic view opens up.

The road is just far enough from the drop-off that drivers can feel comfortable because it looks like it's thousands of feet down. Then there is a great view of all the mountains off in the distance.

It is also this 16-mile scenic drive that leaves most of civilization behind, although many campers, hikers and dirt bike riders will be passed along the way. The parking lot is just off to the right and hikers won't be able to stop themselves from going out to the overlook to see the Mogollon Rim and the surrounding mountains.

The 15-mile round trip hike starts at 7,732 feet and drops down to 7,074 feet. This hike is considered moderate, but on the return trip there are some small hills that leave most hikers huffing and puffing on the way out.

The high altitude meant the temperature was in the 60s at 10 a.m. How many places in Arizona can say that during the thick of the summer?

Those who like a variety of mushrooms will be pleased with plenty of them on the trail, some in trees, some on the ground.

The folks at the Blue Ridge Ranger District said this is an easy trail to follow and for the most part they were right. However, one of the early trail signs was covered by shrubbery last year causing me to take a wrong turn and go two miles off course. This year the sign was on the ground, but because of last year I knew to go straight.

Not long into the hike on the right trail, the first treat was the shade. The trail starts with plenty of pine trees, but before the hiker knows it there are spruce, oaks and aspens. A bit further the maples and ferns start to appear.

Another treat shortly into the hike last year was wild blackberries. This hiker never tasted any sweeter blackberries, but this year the blackberries weren't out yet.

A short while later, the descent drops down into the drainage area, and with the slow running water came a couple huge stands of sunflowers. The sunflowers brought with them a plethora of butterflies. Again that was last year, but not much had bloomed this year.

About one mile in, there is an enclosure with aspen trees and a nice stand of columbine flowers.

This year, it wasn't until we were within a mile of approaching General Springs Cabin about 4.5 miles in that the orange flowers started to pop up. It is here that more prominent stream areas appear before coming into one of many meadows that had the best running stream along the hike. The stream, in the area called Houston Draw, is fenced off to keep cattle out, but hikers can enter at several places. A huge fern forest borders the fence.

Toward the end of the fenced area is an old cabin right near Aspen Springs. This is a great place to have lunch, watch the stream and the forest before deciding whether to turn around or keep going. The cabin area includes an old outside fireplace and a spring with water trickling down into the stream. Unique red and yellow flowers sit on the mossy rocks above and to the side of the spring. Small blue flowers dot the stream.

The Pinchot Cabin, a bit more than a mile down the trail, was part of the network of fire guard cabins on the Mogollon Rim many years ago. The Cabin Loop Trail links General Springs Pinchot and Buck Springs Fire Guard Stations. Pinchot Cabin is named after the first chief of the Forest Service Gifford Pinchot. The Houston Brothers Trail is named after the brothers who owned a ranch in the area.

Arizona Highways rates this as one of the best summer hikes and this hike offers so much that it's hard to disagree.