Bombs burst in air in Winslow 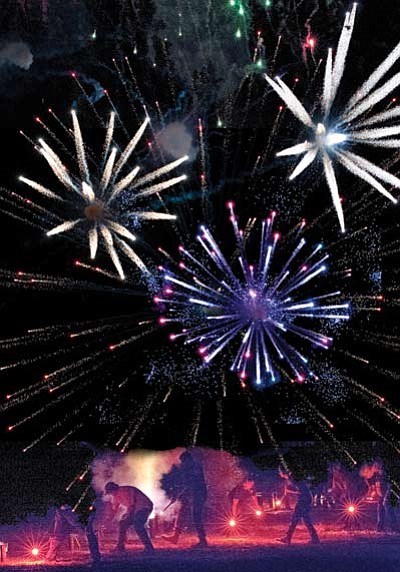 The ground crew lights cannons while fireworks explode in the sky above Winslow during Fourth of July festivites. Photo composite/Todd Roth

WINSLOW, Ariz. - Winslow puts on one of the largest fireworks displays in northern Arizona on the Fourth of July.

It is not in danger of cancellation because of high fire danger since there are no forests nearby. This year featured another great display at Winslow High School's Vargas Field. The celebration included flag raising, music, singing and speeches.

The fireworks display portion was about 45 minutes long and as always spectacular. Winslow residents can watch the display from many parts of the city so everyone interested can find a good view.

The city of Winslow, the Chamber of Commerce and Simmons Realty sponsor the event. Many other businesses and individuals contribute to the event including helping with the cost of the fireworks.

Volunteers who undergo on-site safety training with the Winslow Fire Department light the cannons. Professional firework handlers control some of the bigger pyrotechnics.