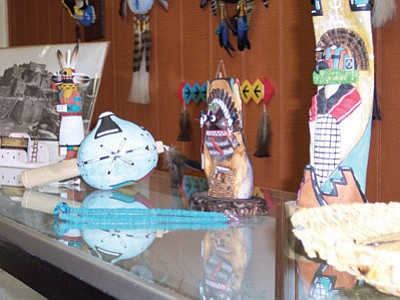 Last year, the Guild put on an art festival but Robert Crying Redbear, who owns the shop with his wife E. Pep Taylor, said the 60 artists they contacted said they could not attend because of economic difficulty, which is why the two decided to open a shop - to help artists give their artwork more exposure.

"It is very difficult for most of the artists in the area to go to Santa Fe, economically it is just not feasible for them," Redbear said. "A lot of the artists are just wonderful artists and they just can't get anywhere, to show their art or to sell their art economically. They really need finances for their families."

One of the difficulties is for the artists to get to places like Winslow or Flagstaff because they do not have the money to leave the reservation. Alternately, if they do have a little money to leave and go to someplace like Winslow or Flagstaff, they may not sell enough to cover the expenditures and end up losing money. While they hope the economic situation changes so the Guild can again put on a festival, for now Redbear and Taylor go to the artists instead.

"We go to them and buy their art and bring it here and sell it," Redbear said. "Or if they have a lot and it's expensive then we will consign it for them, sell it and get it back to them."

Redbear is looking for traditional work - art that is handmade and handcrafted as opposed to copied or reproduced. He and his wife buy the artwork out of their own pockets and while he is not rich he feels this is something he can do for the artists who are struggling more than he is.

"I guess it is a way of giving back," Redbear said. "Since we have a shop, it's a way to bring them here... not physically themselves but at least their art."

Redbear said the shop is filling up quickly with Hopi, Navajo and Cree (Redbear is Cree) art - everything from kachinas and pottery to jewelry and rattles. He also creates art called batik, which is an ancient art of applying wax dyes to cloth to produce an image. Each color is a process. Art with seven colors requires that the cloth is worked seven times to get the effect. Redbear started his work with batik in the 60s.

Redbear said that artists are welcome in the shop. They can come and demonstrate making their artwork at the shop. A weaving demonstration took place at the shop at its opening July 1.

Redbear is also working on a project in the shop that has not been done or seen for 160 years. It is called "Warriors of the Rainbow."

Originally, a woman called Eyes of Fire created the Warriors of the Rainbow about 10,000 years ago. She prophesized that events would come about that would destroy the environment. She created 28 Warriors of the Rainbow, each with their own name and their own tasks and power. They would go out to each tribe throughout the nations to teach them what they needed to know to protect themselves, to change their way of life and to better themselves.

Over the course of hundreds of years, what the warriors looked like has been lost because the masks were not recreated and the details were lost as people have dispersed and died.

But during Redbear's life, he was told stories in great detail of the Warriors of the Rainbow and what they looked like, what their names were and what their purposes were. He knows 21 out of the 28.

After receiving permission from the Cree tribe's chief and his wife, Redbear is recreating 21 of the 28 masks to hang in the shop.

"It solidifies my tribe and the knowledge that still exists," Redbear said. "That our values still exist. These masks were created out of nature, wood, feathers...traditionally as opposed to modern looks."

Redbear said he and the Cree tribal chief and his wife think it is important for people to see the masks and hear the stories of each warrior.

He said the shop is a place for people who search out Native American art to find what they are looking for.

"We're here, let's enjoy each other's company and talk about our art and the stories that go behind it because that is an important thing," Redbear said.

The Red Rocks Native Arts Guild is located at 118 East Second St. in the courtyard of the Skylark.