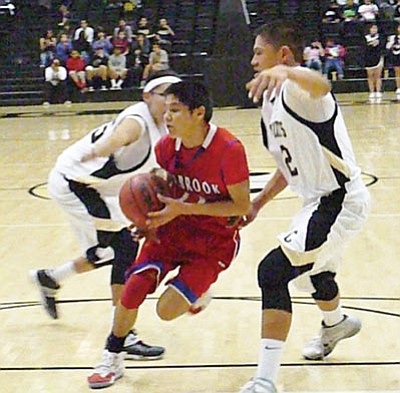 Holbrook’s Kyle Chee (22) splits two Chinle Wildcat defenders, Nathaniel Long (45) and Sooner Brady (32), and drives through the paint for a score during the Wildcats’ 60-55 win over the Holbrook Roadrunners Jan. 25. Photo/Anton Wero

In a pre-game interview with Roadrunners' head coach Raul Mendoza he said, "we are going to try and slow them down a little bit - try to eliminate their passing ability on offense and work on our defense - they are very athletic, they shoot the ball very well, pass the ball well and they are very quick - one of the quickest team I've seen in a while."

Over the years, the Chinle Wildcats' focus has been pressure defense and offense. Coach Charles Gover agreed.

"(We) get the ball up and down the court as fast as we can - score in transition, play manned defense, deny the ball, get deflections and get breakaways for easy scores," Gover said.

The game at the Wildcat Den started with the teams racing up and down the court. The fast paced tempo led to three quick scores by the visiting Roadrunners' Andon Hatch, Donae Hollins, and Kyle Chee - a quick 5-0 run. Chinle responded with scoring from Wyatt Tuni, Kevin Yazzie and Sooner Brady. The first quarter ended with the Wildcats leading 16-14.

With the tempo still in high gear, Yazzie dominated the scoring for the host team in the second frame with nine points and Stanford Etsitty added four points. The Roadrunners countered with scores from Marcel Young, Triston Zahne, Marlin Martin and Chee. The half ended with the Wildcats clinging to a one point lead, 29-28.

The third quarter belonged to the Roadrunners. They outscored the Wildcats 14-13 and the quarter ended with the game tied at 42 apiece.

The Wildcats, led by Tuni, Yazzie and Brady, opened the final quarter with a 10-0 run and led 52-42. During the run, the Wildcats applied a full court pressure defense, frustrating the Roadrunners. With 4:11 remaining in the game, Tuni got a steal off a tip pass at mid-court and raced down the court and delivered a one handed dunk that sent the crowd into a frenzy.

"After the dunk, we lost our composure," Mendoza said.

After a brief timeout the Roadrunners, put together an 11 point run, with scoring from Martin, Chee, Young and Adrian Dickenson cutting into the lead. The Roadrunners sent the Wildcats' Yazzie to the line where he hit on five of seven free throws to seal the win for the Wildcats, 60-55.

"We are getting better - we are starting to understand our defense, defense and rebounding is my main concern going into the playoffs," Gover said.

Yazzie paced the Chinle Wildcats with a game high 20 points, Tuni added 13 points, followed by Ty Francisco with 12 points and Brady with 10 points.

"We start off the new year very well, we are on a little win streak with wins over Window Rock and Tuba City," said Peterson Butler, the Lady Wildcats' head coach. "Defense with our speed is our strength."

Adriana Monroe was fouled when attempting a three. She made two of three at the line to briefly give the Roadrunners a 15-11 lead early in the second quarter.

"We trust our defense (game plan), make some stops things will happen," Butler told his team, during a 20 second timeout.

"We had some bad turnovers and they scored," said Greg Perkins, the Holbrook girls head coach, at the half. "I told the girls in the locker room, we are still in this game, we have got to make some good shots and take care of the ball."

The Wildcats, aided by scoring from a host of players, erupted for a 21 point third quarter. Lynniah Curley and Dejolie hit threes to lead 43-29. The host Wildcats' full pressure defense kept the Roadrunners to only five points in the final quarter, while scoring off turnovers, including two more from beyond the arc. The 18 point fourth quarter led to a 61-34 final score.

"I knew they (Roadrunners) had shooters and aggressive players - we matched up with them, we double teamed them and made them make errant passes - we made stops," Butler said. "We got aggressive from the second period on, I was stressing defense - with defense, you can get turnovers that lead to layups, defense was key to our win."

Dejolie had a game high 15 points, Curley followed with 14 points and Yazzie added 13 points, for the winners - the Chinle Lady Wildcats.

"Chinle is a good team - they outplayed us, we didn't make the shots we needed to and didn't play as quick as we should have," said Perkins in a post-game interview. "Normally we are a good defensive team, we trap well, but Chinle took that away from us."