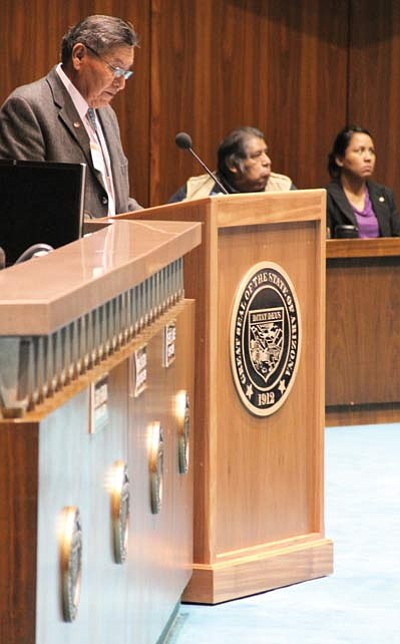 President Ben Shelly praises the passage of the American Indian Education Act during his remarks at the 19th annual Indian Nations and Tribes Legislative Day on Jan. 21. Photo/Rick Abasta

Members of tribal nations across Arizona convened at the State Capitol for the 19th annual Indian Nations and Tribes Legislative Day on Jan. 21. Shelly was the featured speaker for the legislative session which included Diane Enos, president of the Salt River Maricopa-Pima Indian community and Terry Rambler, chairman of the San Carlos Apache Tribe.

The message from the Navajo leadership was clear and direct - get an education and return home to improve the Nation. Shelly encouraged students to be resilient and remain focused on their goal to improve their lives. He spoke about the circle of life and said education is a large part of that process.

"Nobody can do it for you. You have to do it for yourself," Shelly said. "You're going to school and trying to make something of yourself. Don't depend on someone else."

Begay told the students to "never forget who you are and where you come from. Never forget your heritage."

Phelps said the Navajo Nation looks at college students as the cream of the crop and that these students will hit the ground running after they are done with school.

"Maintain your values, your commitment and your focus," he said. "It's your values that will keep you steady."

Legislative Day festivities included an exhibitor fair on the Senate lawn, where many tribal leaders and representatives mingled and conversed. The joint protocol session took place in the House of Representatives. The gallery was packed with tribal members from across the state.

The Ira H. Hayes American Legion Post No. 84 posted the colors, while Miss Indian Arizona recited the Pledge of Allegiance.

Speaker of the House Andy Tobin and Senate President Andy Biggs gave the opening remarks before inviting Shelly to the podium to speak. His remarks to the body were focused on resilience and self-determination.

"The Navajo people live in the concept of T'áá hwó ájít' éego, or self-reliance," Shelly said. "In this time of federal sequestration and budget cuts, this philosophy of T'áá hwó ájít' éego is more important than ever. This doesn't only apply to the Navajo Nation, but to all Indian tribes across the country."

During his address, Shelly lauded the Navajo Nation energy policy of 2013 as a major accomplishment, providing the Nation with employment, economic development and continuing relations with Arizona.

Shelly also reminded the legislators that the federal government has a trust responsibility to Native Americans and that those responsibilities include vital revenue streams for healthcare and education. He noted that North America once had 100 million Native Americans from hundreds of tribes who thrived and lived on these lands.

"Where we stand today was once Indian land and I must give recognition to our host tribes of this area for allowing us into their territory - the Gila River Indian Nation, the Salt River Maricopa-Pima Indian Community and the Ft. McDowell Yavapai Nation," he said.

Shelly touched on the Arizona Indian Education Act, data sharing and the promotion of STEM careers for students interested in science, technology, engineering and math. He also spoke of the importance of supporting the transaction privilege tax (TPT), which is up for discussion this legislative session. Proposed amendments to the TPT legislation would send 25 percent of all state TPT funds generated on the Navajo Nation back to the Nation. Additionally, 75 percent of TPT funds would go back to counties serving the Nation for infrastructure development.

Shelly said the TPT efforts were in step with the Navajo Nation's efforts to retain funding from the fuel excise tax (FET) that currently funnels into the state budget an average of $4 million per year.

"We ask that these FET funds remain on the Navajo Nation and allow us to address the 14,733 miles of road that are on the Nation," he said. "A total of 76 percent or 11,352 miles are unpaved and cost the Nation and counties a large amount of money to maintain."

He said the $35 million project was a tremendous effort between the Navajo Division of Transportation, Arizona Department of Transportation and the Federal Highway Administration to restore essential traffic from U.S. 89, which collapsed in Feb. 2013.

"These partnerships are important because they foster intergovernmental relations and cooperation between the tribal, state and federal government for the benefit of all Americans," Shelly said. "We look forward to continuing positive relations with Arizona and the federal government."