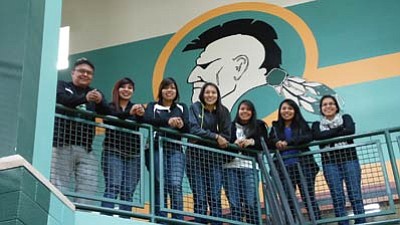 TUBA CITY, Ariz. - Eight of Tuba City High School's (TCHS) Lady Warriors gave it their all this past year, making it to the final four at state for the sixth year in a row.

"We were one game away from the state championship," Barlow said. "But I know our team will be back, the young women on our team are such hard working athletes. One of the areas of our team that we work extra hard on is our communication. That vital communication along with our team bonding is what makes our team a winning competitor in these local Rez and then final state competitions. These young women are fearless."

Kamia Yazzie, who is a senior this year, took home a number of awards. The Navajo Times named Yazzie Player of the Year and First Team Volleyball All Star. Yazzie was also named AIA Division III-All Division First Team. She received an Honorable Mention in the Arizona Republic's sports award category and the Arizona Coaches Association (ACA) Volleyball All-Star award. She was also recently awarded the Arizona Dairymen Volleyball Association's All American for 2013.

All of the seniors who will leave the volleyball program said in a final exit interview that they will continue to play volleyball recreationally when they go on to college this year.

"I think one of the things I learned the most from coach Barlow and my teachers at TCHS was that having to be eligible for sports here, you really had to keep up your grades too, so there was a real push for discipline and school work to get done," Yazzie said. "This kind of discipline is also what separates us from regular students who don't try to stay on top of their grades to play competitive school sports. As a team from Tuba City, we really want to take our grades and our sports seriously. We are representing our Rez and our community and that was really important to us too."

Even though Barlow said the team will lose four players this year to graduation, he looks forward to the upcoming season because he will still have a "solid backbone of four hard working, disciplined team players who can show new players the basic ropes of winning a state championship game."