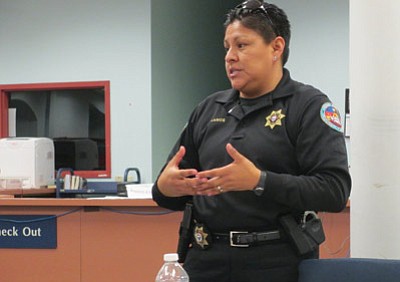 POLACCA, Ariz. - Thirty-three sex offenders live on the Hopi Reservation, but they must check in with Hopi Ranger Andrea Larios and they must abide by regulations or they could be sent back to prison.

Larios spoke at the Hopi Jr./Sr. High Parent Advisory Committee meeting Jan. 7 and spoke to the juniors and seniors at Hopi High Jan. 17 about the issues involving sex offenders. She is open to giving presentations at all area schools.

The Hopi Tribe is involved in the national database to let citizens know where the sex offenders live as part of the Sexual Offenders Registered Notification Act (SORNA).

The father of Adam Walsh lobbied for this act after his son was kidnapped, molested and killed in 1996.

Larios' jurisdiction for registration ranges from Moenkopi to Spider Mound.

Sex offenders have to register regardless of whether they were convicted in federal, state or tribal court.

"Every day, I research to let you know what's happening," she said.

Larios said tier two and tier three convicts of sexual offenses cannot attend any events on school campuses. She said some schools even have stiffer policies. Hotevilla-Bacavi Day School and Second Mesa Day School have policies against any sex offenders coming on their campuses. She said if any school officials or members of the public spot a sex offender on a school campus that they should call her right away and she will remove them. Neither school officials nor security guards should try to remove them because of the possible dangers.

If a sex offender were to repeatedly come onto a school campus, whether it was to check on their children or go to a basketball game, they could be charged with a felony for failing to comply with their SORNA regulations.

"Our job is to protect the community," she said.

Hopi High Principal Glenn Gilman said he would recommend to Interim Superintendent Albert Sinquah that Hopi High update its policy toward sex offenders and also have more staff training about what to do should they come on campus.

All of the schools on the Hopi Reservation have public files on the 33 sex offenders in their front office. These files are open for public viewing.

Sex offenders retain some rights. One right is to practice their religion so they can still go to church or religious ceremonies unless the church or religious leaders ban them. If the sexual offender is a minor, they still have the right to an education and cannot be banned from school.

Principal Gilman told the students that public law requires that any suspected sexual, physical or emotional abuse or neglect must be reported to either a teacher or staff member.

Romalita Laban, executive director of the Hopi-Tewa Women's Coalition to End Abuse, said it's important to know who is in the community in order to keep the children safe. She advised students to be wary of sexual assault, teen dating or stalking. She said January is Stalking Awareness Month and no one should tolerate stalking. The Hopi-Tewa Women's Coalition can be reached at (928) 737-9000.

Larios told the students that "no means no" and if someone keeps pursuing sexual activity after they are told no that they could be convicted of sexual assault. She also warned students about statutory rape - when a student 18 or older has sexual contact with a student younger than 18. She told students to be careful with social media, such as Facebook, because that is where many sexual predators get their information.

"So listen to your parents, elders and guardians when they tell you to be careful with yourselves. Let your parents know where you are going and when you are coming back," she said. "If something happens tell a trusted adult. Nobody can help you if you stay silent."

Larios told the students that she knows they like to keep their friends' secrets, but if somebody is being hurt they are obligated by law to report it.

She also warned against students committing sexual offenses because it would keep them from getting jobs or joining the military.

During the assembly at Hopi High, some teachers and students brought up the question about displays of public affection by students. This is not illegal or part of SORNA, but it is against school policy and students will be disciplined for it.