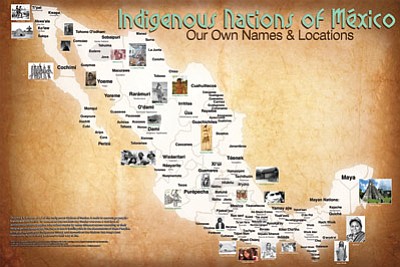 Aaron Carapella’s map of Mexico documents the ‘true names’ of Native American tribes before the groups had contact with Europeans. Submitted photo

Aaron Carapella has added Mexico to his unique map collection that reflects the true names of Native American tribes across the United States and Canada before the groups had contact with Europeans.

Carapella, who is part Cherokee, said he spent 14 years making the continental U.S. map and he has been working on the Mexico map for about the same amont of time, though the final push to get it done took about six months.

"I've tried to stay on a path, first getting the U.S. one done, then Canada, then Mexico," he said. "I am trying to put the puzzle pieces together of what pre-contact indigenous North America looked like."

Carapella said his fluency in Spanish helped him make the Mexico map. He said he met many indigenous people from Mexico over the years since he was a teenager and that knowledge helped him get outside of straight book research.

"One thing Americans don't usually know, there are huge segments of the Native population of Mexico that have come up to the United States and settled into their own communities here in the U.S.," Carapella said. "One thing I kind of learned when making this map is how many tribes were wiped out in Mexico, I didn't really realize that until I really started completing the research on it."

He said that, as with the map he did of Canada, the border between Mexico and the U.S. is an arbitrary one that did not exist for the tribes his map reflects.

"There are probably about two dozen tribes that are existing today that have populations on either side of the U.S./Mexico border," Carapella said. "What's interesting is that on the Mexican side, that's where the language and culture has been preserved the best."

He said the reason for that preservation is assimilation efforts by the Mexican government were not as stringent as the American efforts to relocate children to boarding schools where they were not allowed to keep their language or culture.

"I went to one town where all the children speak their language," Carapella said. "But if you go to San Diego, there are maybe 10 children growing up with that language on all the reservations. It's kind of interesting the dynamics of how historically it has played out if a tribe happens to land on one side of the border or another."

He said that about 95 percent of the people in Mexico are native or have some type of Native descent. In the U.S. about one percent of the population is affiliated with a tribe.

"In Mexico it is so permeated throughout the population that the only tribes that actually carry cards are some of those border tribes and they carry those cards so they can get across the border without being disturbed," Carapella said.

In the last couple of decades, he said the U.S. and Mexican governments have come to terms with a "rite of passage" for certain tribes to cross the border for ceremonies at different times of the year where they historically did before the border existed.

"There is some effort in recent times for the governments to recognize, 'hey, we crossed a path right through these people's nations,'" Carapella said.

He said because Native Americans in the U.S. are so regulated by the federal government, that leads the majority of native people here to recognize Mexicans as Indians, too.

"It's almost like an underlying movement among a lot of Native Americans to write off and dismiss the Indian connection, if the person has a tribal card saying they are 1/16th native they feel like they have the right to dismiss a full-blooded Indian in Mexico because they don't have a card," Carapella said. "It is just a really strange dynamic."

But this does not mean that there are not similar problems within the communities in Mexico, too, where a caste system is in place where most people claim to have predominately Spanish blood.

"There is a lot of emphasis on de-Indianizing somone," Carapella said. "Down there instead of calling someone stupid or dumb, they'll say, 'no seas Indio' which means, 'don't be an Indian,' a very derogatory viewpoint."

Carapella said showing that the borders were non-existent during pre-contact times was only one reason for making the Mexico map. He said there are a lot of Mexican American people in the U.S. who either know or are seeking what tribes they are from and they are proud of that heritage.

"One reason I made this map, it's a visual display for people that their ancestors were from Mexico and now they are displaced," Carapella said. "I just want people to take pride in where they come from in Mexico, too. That's also Indian country if you look at it historically. I just hope to instill some pride in Native people no matter where they come from."

His next map is Alaska.

More information about Carapella and his maps can be found at www.aaron-carapella.squarespace.com.