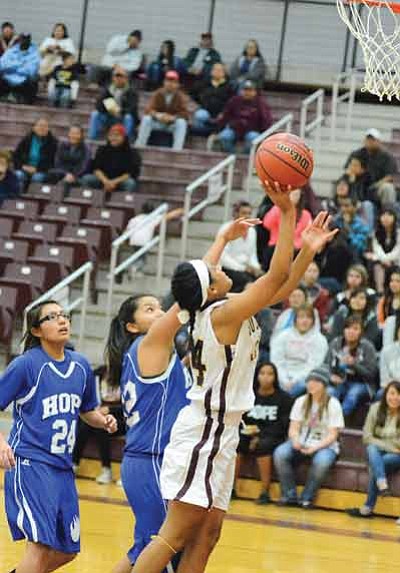 WINSLOW, Ariz. - The Winslow Lady Bulldogs picked up a pair of important wins on the road last week with victories over the Alchesay Lady Falcons Jan. 9 at Whiteriver and the Tuba City Lady Warriors in Tuba City Jan. 11. Both of those teams have winning records and are battling the Lady Bulldogs for playoff positions.

The Lady Bulldogs defeated the Alchesay Lady Falcons 68-52. The win improved Winslow's record to 10-4 for the season and dropped Alchesay to 12-6.

The game was very close with Alchesay leading 11-8 after the first quarter and by a commanding 32-20 at the half. Winslow rallied to tie the game at 45-45 by the end of the third quarter. The Lady Bulldogs outscored Alchesay 23-7 in the crucial fourth quarter to secure the hard fought victory.

Shandiin Armao led all scorers with 19 points for Winslow. Halle Hayes scored 16 points and Tannon Tom scored 12 points to end the game in double figures for the Lady Bulldogs.

Raleigh Johnson led Alchesay with 15 points. Patricia Tessay was also in double figures for the Lady Falcons with 13 points.

The Lady Bulldogs defeated the Tuba City Lady Warriors 60-44 in a basketball game played in Tuba City. The win improved Winslow's record to 11-4 for the season and dropped Tuba City to 8-6.

Winslow had a narrow 17-15 advantage after the first quarter and maintained that slim advantage 29-25 at the half and Winslow led 36-32 after three quarters. The fourth quarter saw the Lady Bulldogs pull away by outscoring the Lady Warriors 24-12.

Marcella Joe and Armao led all scorers, each scoring 17 points for the Lady Bulldogs. Hayes was also in double figures for Winslow. Tate Tsingine led Tuba City with 16 points but was the only Lady Warrior in double figures.