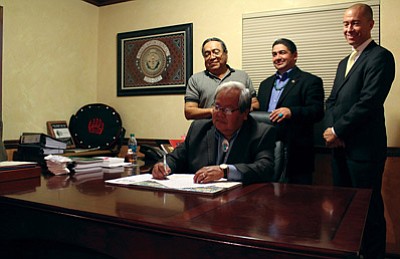 Council Delegate Alton Joe Shepherd said he respects Speaker Johnny Naize as a colleague and as a leader. But the charges against Naize have prompted several members of the Navajo Nation Council to ask Naize to step down.

"The right thing to do is step down and take care of those charges," Shepherd said. "A leader will choose what is best for the Nation, in this case the Navajo Nation Council, and with his action to remain as Speaker, he is only dividing the Council."

Under Navajo Nation law a two-thirds vote of the full council can remove the speaker. In Jan. 2013, Naize was elected to serve a second consecutive term through 2015. The speaker serves a term of two years at the pleasure of the Navajo Nation Council.

On Dec. 3, the tribe's special prosecutors charged Naize with 10 counts of bribery and one count of conspiracy in the district court in Window Rock. The prosecutors allege council delegates including Naize have misused the discretionary fund program, which was established by the Navajo Nation Council to provide financial relief to needy constituents.

The special prosecutors allege that council delegates instead gave money from the discretionary fund to family members against Navajo Nation law and entered into a plan that they described as a "you scratch my back and I will scratch your back" plan. The prosecutors also allege council delegates would authorize a certain sum of money to the family of another council delegate and in return would receive the same amount of money from those same delegates. According to court documents, Naize's family allegedly received more than $36,000 from the discretionary fund.

Naize said that he was "surprised" and "disappointed" by the bill that was introduced. He said as a former law officer Shepherd should have recognized and upheld due process and the right to be presumed innocent until proven guilty.

"Unfortunately, some individuals have taken advantage of this opportunity by introducing politics into this legal matter," Naize said. "However, I acknowledge Mr. Shepherd's right to introduce such legislation and I will respect the legislative process."

Naize said, as he has stated many times, that he believes the charges against him are unfounded and the evidence in the case will prove this. He has no intention of stepping down from his role as speaker.

"I firmly believe in times of adversity, a leader should step up and not back down to the challenges brought forth by the politics of others," Naize said. "Stepping down would set a dangerous precedent for future leadership by establishing an atmosphere in which elected officials are expected to simply resign without having the full benefit of legal representation and 'due process.'"

Naize is scheduled to be arraigned in March.

In 2011, the Navajo Nation appointed the special prosecutors from the Rothstein Law Firm after a civil complaint was filed alleging that current and former tribal officials had misused money from the $32 million discretionary fund.

In Aug. 2013, the special prosecutors announced that 72 criminal complaints were filed alleging that tribal officials had conspired to give money to family members from the discretionary fund.