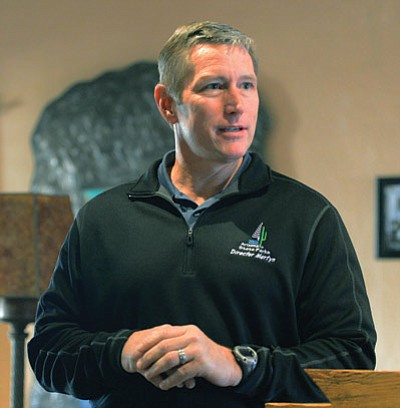 In his first remarks, Martyn explained that Arizona State Parks does not have facilities in Maricopa County but serves as a vehicle for getting tourists and travelers to more rural Arizona areas. He said his vision is to have each park meeting the same high standard so visitors will come away with a positive impression of state parks in general and they will look forward to more park visits.

The parks system's budget has taken a big hit beginning in 2007 and current funding resources are significantly below their peak in 2006. Arizona State Parks retain venues all over the state by partnering with cities adjacent to a state park. In Winslow's case, at the Homolovi Ruins State Park, the city provides water to the park at a reduced rate. The Hopi Tribe contributes as much as $150,000 per year to keep the park open. Volunteers help reduce park costs significantly as well.

In the second half of the presentation audience members asked a number of questions.

Ann-Mary Lutzik of Old Trail Museum asked about support from the State Historic Preservation Office (SHPO) since it is now part of the State Parks Administration. Martyn confirmed that his office is supporting SHPO activites that affect Winslow.

Marie Lamar asked about the possibility of the parks producing a dramatic post card for advertising depicting Homolovi. Martyn said he thought it was a viable idea, probably self-supporting and will pursue it with his staff.

Tess Kenna asked about improving the condition of Little Painted Desert Park, which is a county facility. Martyn recommended reminding the county of the situation. He also suggested writing a letter to the editor in the newspaper lamenting the park's condition.