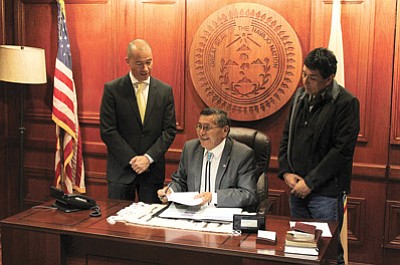 WINDOW ROCK, Ariz. - On Dec. 30, the Navajo Transitional Energy Company, LLC (NTEC) bought the Navajo Mine, located on the Navajo Nation, from BHP Billiton Limited. NTEC will supply coal to the Four Corners Power Plant through 2031.

Steve Gundersen, chairman of NTEC's management committee, said it is the Nation's vision to become part of the solution to create a cleaner and more sustainable world. He said NTEC is prepared to assist the Navajo Nation with transitioning its economy from one based on current coal-fired power generation technologies to one based on clean coal technologies and renewable energies.

"By acquiring the mine, the Nation will be able to exert greater control over the management of its natural resources as both owner and landlord," Gundersen said. "The acquisition of the Navajo Mine was an extremely complex undertaking. Throughout the process, which lasted over a year, NTEC,

the Navajo Nation, BHP Billiton and the Four Corners Power Plant overcame many challenges to bring this project to a successful conclusion."

Navajo Nation President Ben Shelly said the purchase of the mine guarantees revenue, which is used to provide public services and jobs for the Nation.

"The coal mine purchase secures our economic future, strengthens our Navajo Nation Energy Policy and the portfolio of the Nation," he said.

Martin Ashley, executive director for the Office of the Navajo Tax Commission, said the Navajo Nation receives between $50 million to $70 million annually in royalties, taxes and leases from both the power plant and the mine.

"There are people who want renewable energy to fund the Nation, but for the generation of electricity, solar and wind are more expensive than coal. Coal is a cheaper way to produce electricity," he said.

Gundersen said one immediate effect of NTEC's decision to purchase the Navajo Mine, which has been under threat of closure along with the Four Corners Power Plant, will be the preservation of nearly 900 jobs, many of which are filled by Navajos.

During the Dec. 23 session to approve the legislation, discussion stopped after an outburst from protestors who opposed the legislation. Navajo Police arrived to prevent any further disturbances. The session adjourned and the legislation was forwarded to the full council. The council passed the legislation on Dec. 27 with a 17-5 vote. The bill granted a limited waiver of the Nation's sovereign immunity to allow NTEC to obtain performance and reclamation bonds to acquire the coal mine.

Lester Begay, Tiis Tsoh Sikaad Chapter president, said the people in his community, which is about 30 miles south of Farmington, N.M., are against coal because they see no benefits in either jobs or money.

"It's bad for the environment, as far as the public goes, pollution-wise. Then as far as investment goes, it's a bad investment, too," Begay said, adding NTEC is also absorbing BHP's liabilities that could cost as much as $1 billion.

Begay, who was a boilermaker and former president of one of the Navajo Nation's local boilermaker unions, said he has experience to talk about power plants because he helped build them all across the United States.

He questioned whether the Navajo Mine could compete with other coal generating states like Wyoming, Kentucky, and West Virginia, which are competitive in the coal market and also have a higher quality of coal.

"China cut back on their coal demands, the use of coal and they are going to start going to clean energy. So the market is actually going to fall," Begay said. "I just don't think the Navajo Mine will be able to compete. Their coal, it is just pretty bad, it's not the coal that Wyoming, Pennsylvania or Virginia has."

"That's just opening a whole new door. Now they've done that they will just think that they can do that to other issues," Begay said.

On Jan. 1, the Four Corners Power Plant permanently closed units 1, 2 and 3 of its power plant because of an agreement made in compliance with the Environmental Protection Agency's (EPA) final regional haze rule, which required the closure by the end of 2013.

Units 4 and 5 of the power plant will continue to operate using NTEC supplied coal and selective catalytic reduction controls will be installed and operating by July 31, 2018, in compliance with the EPA.

Begay does not think the Four Corners Power Plant can compete with newer plants that have been built in the last 10 years and which will be able to run for many more years.

"The power plant is too old, the structure is all fatigued, there's a reason they want to put the emission controls there, the power plant is about to fall apart," he said. "I don't think they are going to survive at all."

The units that remain in operation at the Four Corners Power Plant were built in 1969 and 1970.

The previous owner of the Navajo Mine, BHP Billiton, will continue as mine manager to operate and maintain the coal mine until its contract ends in 2016. With NTEC as the new owner, Navajo Mine will continue to supply coal for the nearby Four Corners Power Plant.

On May 18, 2013, the NTEC Management Committee was established with authority for management of the business affairs, operations and functions of NTEC.