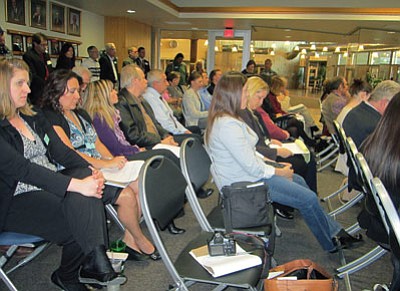 FLAGSTAFF, Ariz. - Officials with Coconino Community College (CCC) will reduce offerings at the college's Page campus, raise tuition and eliminate programs and staff positions as part of the college's efforts to close a $1.3 million budget gap.

In a packed meeting before staff, students and the public, CCC's District Governing Board voted unanimously to adopt a financial austerity plan that includes a mix of revenue generating and expense cutting options starting July 1.

The plan comes after county voters turned down a property tax hike that would generate $4.5 million last fall.

Board Chairman Patrick Hurley pointed out that CCC did nothing wrong financially but that the college still faced a structural deficit because of low property tax rates. He said there were no clear-cut solutions to the financial dilemma the college faces.

"There were no easy choices for the board," he said.

Before the vote, the board considered closing the Page campus altogether.

Board member Lloyd Hammonds read portions of 50 letters he received urging the board to keep the Page campus open. A large and vocal group, which included residents of Page, students, representatives from the Navajo Nation, the mayor of Page and District 5 Coconino County Supervisor Lena Fowler all spoke in favor of the Page campus and its importance to the community at the meeting.

Leonard Chee, executive director of the Navajo Nation Division of Community Development in Window Rock, said the Page campus is one of the only higher education learning opportunities for the Navajo people in that area.

"Education is the only opportunity we have to get out from where we're at, as far as getting better paying jobs and other opportunities, that is what I want to stress to you," he said. "Most of our Navajo students are the majority of the students enrolled there."

According to a letter to the governing board from the office of Navajo Nation President Ben Shelly and Vice President Rex Lee Jim, the Page campus is 75 percent Native American. Out of the 250 high school students enrolled in the dual credit program, 85 percent of those are Native American.

"A lot of our communities surround [the Page campus]," said Dwight Largie, a representative from the office of the Navajo Nation president and vice president. "A lot of Navajo money goes in there, a lot of Navajo money that goes into the cities that are around the Navajo Nation, ... Flagstaff, Gallup, Winslow, Page... a lot of money that leaves our Nation and there should be some type of contribution back to us in terms of scholarships or teaching our Navajo people how to do research," he said.

"Some classes will still be offered, based on demand, and there will be greater reliance on interactive television and online offerings for instructional delivery," said Dr. Ross Rothamer, CCC vice president of Academic Affairs. "The commitment to the dual enrollment program where high school students can earn college credits at CCC while still attending high school will continue."

Additionally, the college will cut the nursing program in half, from 40 graduates to 20,

despite its top ranking and high average pass rate of 90 percent on the state licensing examination.

Tuition will be raised an additional $2 per credit hour. On top of the $2 million cut previously (the equivalent of 25 full-time positions), the plan calls for an additional cut of 15 full-time jobs, 10 percent of CCC's full-time workforce.

"After examining the data and the many possible scenarios, we are confident

we have chosen the 'lesser of two evils,'" Hurley said.