Thatcher Eagles end Winslow Bulldogs' post-season Feb. 18
Bulldogs up by four at the half, Eagles rally in second half to win with 66-61 final score 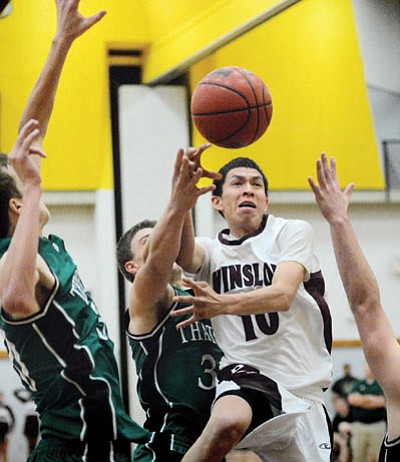 WINSLOW, Ariz. - A good season for the Winslow Bulldogs ended when the Thatcher Eagles upset them in a Division III state tournament game before Winslow's home fans on Feb. 18. The loss came after a similar close loss to Show Low in Show Low in the Sectional Tournament.

Ten Winslow seniors will graduate this year. Members of an undefeated junior varsity team and a freshman team that only lost two games will replace them next year.

The Eagles defeated the Bulldogs 66-61 in a very close game. The loss ended Winslow's season with a 20-13 record and sent Thatcher to Tucson to play Benson with a 21-10 record.

The fourth quarter was evenly played, but Thatcher had a narrow lead entering the final minute and Winslow missed several opportunities to close the gap.

13 of 16 free throws. Jeff Shumway with 12 points, Mason Mortenson with 11 and Brandon Jorgenson with 10 points were also in double figures for the Eagles.

Keenan Keams led Winslow with 12 points. Frank Kelly with 11 points and Stevin Nelson with 10 points also scored in double figures for the Bulldogs.