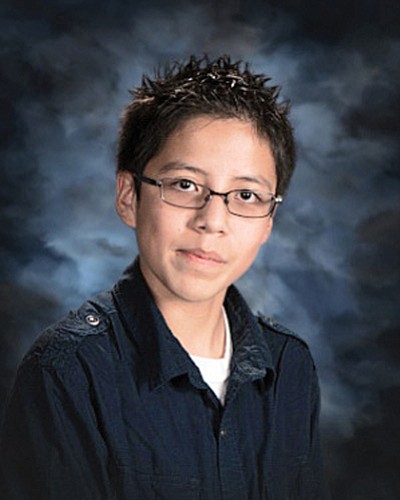 FORT DEFIANCE, Ariz. - Jaden Kirklee Redhair, an eighth grade student at Tse'hoot'sooi Middle School in Window Rock, has been chosen to attend the 2014 World Leadership Forum during the June 30-July 6 session, providing his family can raise the money for him to go.

Redhair, along with fellow students from around the world, will travel to Washington D.C. and Philadelphia to participate in a People to People Leadership Forum.

While there, the students will experience history at the Washington Monument, visit Arlington National Cemetery where they will pay tribute to fallen soldiers, view the Lincoln Memorial and stand on the spot where Martin Luther King, Jr. gave his "I have a dream" speech.

In Philadelphia the students will celebrate another year of independence at the Independence National Historic Park, explore Independence Hall where the Declaration of Independence was signed and see the Liberty Bell.

The students will also explore the U.S. Capital, learn about the branches of government, lay a wreath at the National World War II Memorial, sing and see the Star-Spangled Banner at the Smithsonian National Museum of American History and attend the "Red, White and Blue Celebration" at George Washington's Mount Vernon estate.

"I feel excited to go on this trip because I get to go to somewhere I have never been before," Redhair said.

Redhair had to be nominated by a respected educator or parent. His school counselor, Arlinda Betone, nominated him for his demonstration of outstanding scholastic merit, leadership potential, and exemplary citizenship.

Redhair was invited to go to the program last year, but because of the money necessary to get him there, the family received an extra year to try and raise the money. Chelseah Ahasteen, Redhair's mother, said her son's school is considering helping to finance some of the cost if Redhair will come back to the school and present what he learned to the student body and to the school board. It will cost Redhair's family $2,673 to send him on the trip.

"I'm really excited because I know he is a leader and I know his teachers know how smart he is," Ahasteen said. "Sometimes his teachers will have him help other students."

Redhair has been a member of the Arizona Association for Gifted and Talented students since the fourth grade and the John Hopkins-Center for Talented Youth since the sixth grade. He was inducted into the National Junior Honor society in the sixth grade. He is an alternate in the third round for the spelling bee. He placed first in physics in the Science Fair at his school on Feb. 18 and has qualified to attend the Navajo Nation Science Fair on Feb. 28.

Redhair is a straight A student. He received awards for being on the Honor Roll and for Academic Excellence. He has been put into the United States Achievement Academy (National Leadership Merit Award) Yearbook 2012-2013 and the United States Achievement Academy (All-American Scholar Award) Yearbook 2012-2013. He was nominated by Betone for both of those awards, too.

More information about the People to People Leadership Ambassador program is available at (888) 275-5061, leadership@peopletopeople.com or PeopletoPeople.com/leadership.