ADOT hopes to begin 89A repairs in spring 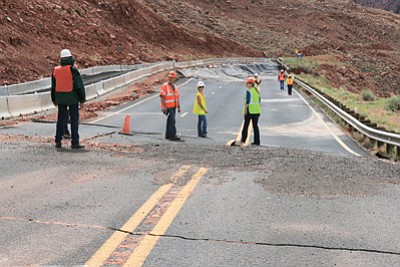 The Arizona Department of Transportation (ADOT) conducts an environmental survey Sept. 10 on U.S. 89 25 miles south of Page. ADOT hopes to begin repairs in the spring on the roadway damaged by a landslide Feb. 20, 2013. Photo/ADOT

PAGE, Ariz. - One year after a landslide forced the closure of U.S. 89 south of Page, the Arizona Department of Transportation (ADOT) is gearing up to start construction in early summer, potentially completing the emergency repair by the end of this year - if there are no environmental, utility or right-of-way hurdles.

ADOT passed a major milestone last week toward beginning construction on the repair of U.S. 89. ADOT submitted final environmental documents to the Federal Highway Administration (FHWA) Feb. 19 for review. Without this clearance, ADOT cannot use federal funds for the project. While that approval is expected in the next couple of weeks, ADOT continues work on pre-construction elements of the project including finalizing the design of the repair. ADOT will begin to work with a construction contractor on the repair this spring.

After an extensive geological investigation into the Feb. 20, 2013 landslide that concluded in July, ADOT has made major strides in accelerating progress on the emergency project.

Since August, ADOT has retained engineering design firm AECOM and has developed plans for the eventual repair, finalized all federally required environmental reviews that include cultural, biological and water quality measures and completed the plans for the required right-of-way easements.

Because the lack of a usable road between the Bitter Springs and Page communities is a hardship for many area residents, ADOT worked to speed up the environmental and design process, which on a normal project can take two years to complete. ADOT has been working with the FHWA, Navajo Nation, Navajo Division of Transportation and the Bureau of Indian Affairs to expedite the environmental, utility and right-of-way clearance and approval process.

ADOT also continues to work with the Navajo Nation to get right-of-way easements that will be necessary prior to construction. An agreement between FHWA, Navajo Nation and Bureau of Indian Affairs must be reached to establish an expanded easement for construction, as well as operations and maintenance of the full repair.

"Our final goal for delivery of our three-pronged approach - which initially included the geotechnical investigation and providing emergency access, and restoring mobility to the region with the paving of Navajo Route 20 - is to complete the US 89 reconstruction by advancing the necessary environmental, utility and right of way clearances as diligently as possible while complying with all the regulations in conjunction with our Navajo Nation partners and other regulatory stakeholders," said Jennifer Toth, ADOT state engineer and deputy director for transportation. "This project remains a top priority for ADOT and our project partners."

The repair is currently estimated to cost $25 million. The project will include moving the roadway about 60 feet toward Echo Cliffs and using that rock to construct a downslope buttress to stabilize the area.

Shortly after the landslide, ADOT, along with the Navajo Nation and the FHWA, pursued paving Navajo Route 20 (which became the U.S. 89T route) to serve as a short-term solution. By paving N20, the length of the originally established detour route (US 160 and State Route 98) was cut in half.

After three months of intensive work, the newly paved two-lane roadway opened to traffic in August.

The U.S. 89 emergency repair project is eligible for reimbursement through the FHWA's emergency relief program, which provides money to state and local agencies for the repair or reconstruction of highways, roads and bridges that are damaged in natural disasters and catastrophic failures.