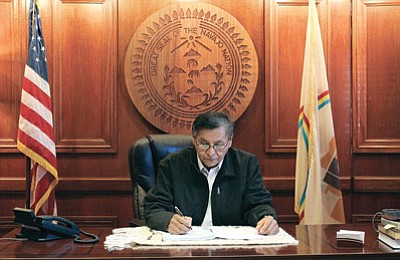 Navajo Nation President Ben Shelly vetoes the Healthy Dine’ Nation Act of 2013. He cited the lack of regulatory provisions as the reason behind the veto. Photo/Rick Abasta

WINDOW ROCK, Ariz. - Navajo Nation President Ben Shelly vetoed a recently approved 2 percent junk food tax on Feb. 12, citing a lack of money to collect the tax and the lack of an impact study for businesses on the Navajo reservation.

The 22nd Navajo Nation Council passed the Healthy Diné Nation Act during the winter session. The legislation added the tax on top of the Navajo Nation's current 5 percent sales tax on junk food sold within the Navajo Nation. The legislation defined junk food as sweetened beverages and pre-packaged and non-prepackaged snacks low in essential nutrients and high in salt, fat, and sugar including snack chips, candy, cookies, and pastries, but excluding nuts, nut butters, and seeds.

After meeting with his general counsel and the Office of the Navajo Tax Commission (ONTC), Shelly said the legislation would create an unfunded mandate, because no money was identified or appropriated to pay for the tax administration. In addition, he said the new responsibilities would increase the burden on the already underfunded tax office.

Shelly said nobody knows how the tax would affect local business as well.

"There is no impact analysis. What's the impact on the local businesses, especially the small businesses?" Shelly asked. "Is this tax legislation going to become law without the Nation clearly understanding its impact on Navajo businesses?"

Martin Ashley, executive director of ONTC, said in a memo to the Navajo Nation Council Speaker Johnny Naize that the tax office had not studied the impact on businesses on the Navajo Nation to determine how much money was collected from junk food and the impact of the tax elimination on fresh fruits and vegetables.

ONTC provided an estimate of junk food revenues based on a percentage of gross retail sales on the Navajo Nation for 2013, which totaled $172.9 million.

The estimate was based on 50 to 80 percent of the 2013 gross retail sales. Multiplied against the proposed 2 percent tax, the revenue projections varied from $1.7 to $2.7 million.

The sales tax elimination on fruits, vegetables, water, nuts and other healthy foods was projected to be about 10 to 20 percent of the 2013 gross retail sales and multiplied by the proposed 5 percent tax break.

Shelly said that more research into the impact on local businesses needs to be addressed before he would sign the legislation into law.

He also said it was important to educate and communicate with businesses on the legislation. Changes in the tax forms and instructions needed to be made, cash registers would need to be reprogrammed to identify junk food taxable items, the tax commission would need to be trained and educated and there needed to be consistent regulatory operations.

"This proposed tax will be imposed on the Navajo people, not the food and beverage industry or its distributors," Shelly said. "The junk food importers will continue business as usual. The bottom line is that Navajo people will be taxed to pay for community wellness projects to address health concerns that are the trust responsibility of the federal government."

He also questioned whether restaurants, fast food chains and mutton stands would also be subject to junk food taxation.

Shelly said the Navajo Nation is not ready to collect taxes on junk food.

"We must explore other alternatives like focusing on education of health issues," Shelly said. "Taxation is not the answer."