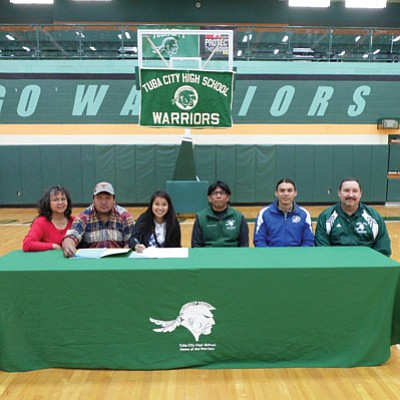 Diné College was established in 1968 and is the first tribally controlled community college in the United States. The college continues to support and recruit young and gifted Native academic and athletic talent from reservation high schools throughout the southwest.

Sheppard, who was one of the brightest stars on the TCHS girls cross country team this past year, was praised by head coach Arvis Myron.

"This is a great opportunity for Chelsea to continue her running at the collegiate level. However to me, its more important that she will be able to use her running talent to continue her education toward a formal degree," Myron said. "For all my student athletes, this is a goal that I really like to emphasize, that it's really possible to use your physical gifts to help get a college degree."

Myron said Chelsea has been a part of Tuba City High's running program for the past four years and has made many valuable contributions to her team as both a team member and its captain.

"She has set a standard this year, and that has been team concept and cohesiveness," Myron said. "That with these skills, you can accomplish a lot in your career and lifetime. I am elated that she has chosen Diné College to attend this coming year because I know the coach there and it will be a good fit with Shaun Martin. Several of our former great runners have attended and run for Diné College so I know she will fit into the program very well. I am certain her parents will support her and this will make her a total success for her family, herself and her community."

Sheppard will be able to choose a career that will give her the best range of choices for her future endeavors.