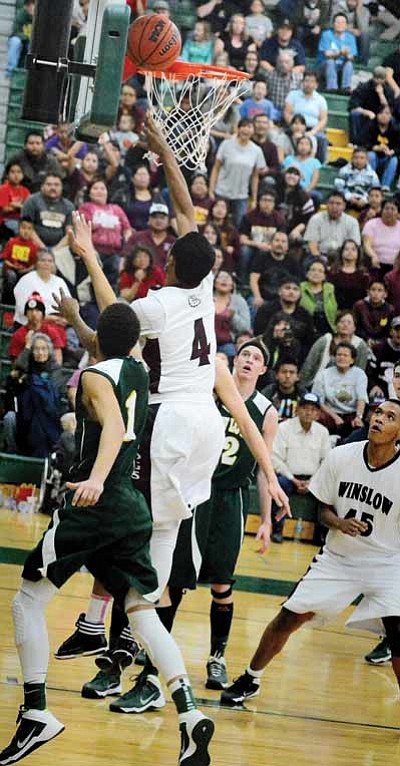 The Winslow-Alchesay game was originally slated to be played in Show Low, but the Arizona Interscholastic Association moved it to Ganado fearing that the Show Low gym could not accommodate the large crowd expected to attend.

The win improved Winslow's record to 20-11 for the season and earned them a berth in the Sectional Championship game Feb. 15 at Show Low. Show Low pulled out a 51-48 win in overtime. The Bulldogs played host to Thatcher at home Feb. 18. With a win, after the NHO went to print, Winslow would travel to Tucson to play Benson at at Amphitheater High School.

The Bulldogs had a narrow 10-7 lead after the first quarter and led at the half by the same margin, 26-23. A good third quarter left Winslow with a 44-34 advantage going into the fourth quarter, but the Falcons rallied and the game was not decided until the final buzzer.

Arnold Walker of Alchesay led all scorers with 18 points. Rashaan Stover with 14 points was also in double figures for the Falcons.