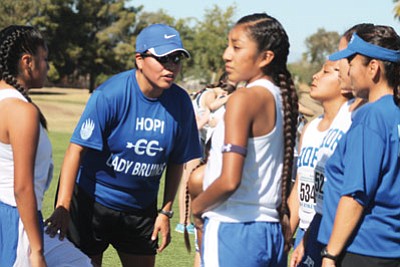 Tot Workman, coordinator of the event, contacted Lomakema about the awards.

"I'm proud of these runners because they accomplished a lot," she said.

Ben said the award showed her that her hard work paid off.

"This award is important to me because this will help me get into a good school because of my running ability, and I can run in college," she said. "My parents were proud and excited for me."

Ben said the ceremony was a long five hours.

"But it was the best five hours I encountered during a ceremony," she said.

Ben, a senior, plans to major in criminology at either Ft. Lewis College, Webster University or Hastings College.

"My advice for runners is that you should believe in yourself. Dedication is the main quality and have fun. You can accomplish anything you want. You just have to go out there and do it," she said.

Billy said she was honored to receive the award.

"It shows all the hard work I accomplished by running," she said.

Billy, a senior, plans to major in physical therapy at Arizona State University where she also plans to run. Her advice to runners is to keep running because hard work pays off.

"Not many Native American athletes receive this award," she said.

She said her parents and coach were proud of the three girls who received the award.

"The gathering was small and simple, which I liked," she said.

Josytewa said this will motivate her to improve her times on the track.

Josytewa will major either in broadcast radio, hotel management or restaurant management. She is not sure where she will go to college.

She said her best memories from cross-country are spending time with her cross country family, especially spaghetti dinners.

Her advice to cross country runners is to keep challenging themselves.

"No matter how hard it gets you have to believe in yourself," she said.

To be recognized as an All-American, students must not only show outstanding athletic prowess, but the athletes must have a 3.0 grade point average and have done something positive for the community. Most athletes don't apply because they know they wouldn't meet the criteria in at least one area. There were 29 applications this year and not all were accepted.

Six girls cross country athletes earned All-American status, so Hopi was proud to have three of them.

"Most schools would be happy with just one," Lomakema said. "They represented our area well. It was neat when Tot introduced us as a group and highlighted our runners' exceptional performances at state, especially for our pack time."

One volleyball player from Tuba City was the only other representative from the north.

"I'm glad they received the recognition they deserve. They worked hard for the past several years," Lomakema said.

Lomakema was thrilled when Wings Director Dustin Martin called and asked her to join the squad as a coach.

"I will do my best by virtually coaching them," she said.

The runners that she is coaching are spread throughout the country so she is coaching them through emails. One runner is in Minnesota where the temperature is below zero so she can't run outside. Lomakema advised the runner to split up the time for her workouts.

"I can't take credit for getting this honor. The girls have put us where we are at," she said. "I'm thankful for the girls we had, for trusting me with their training and performance."

Area runners involved in Wings of America this year include Daangoina Haven from Ganado and twins Anthony and Brian Masayesva from Tuba City.

"The girls were happy for me and took pride in my appointment," Lomakema said about her runners.

The Wings runners will have their national race Feb. 13-16 in Boulder, Colo., with Feb. 15 as the day of the race.

"I'm looking forward to the experience. The sport has been good to me and I'm excited," Lomakema said. "I'm very fortunate to work with such a great group of girls."

"I couldn't believe it at first, but I know she's fit for the job," she said.

Lomakema will also be inducted into the Navajo Nation Hall of Fame April 5.