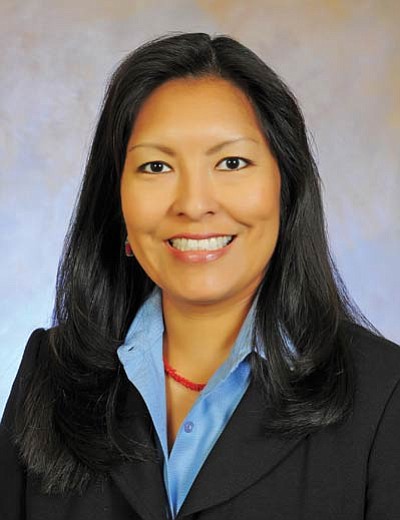 WASHINGTON - Diane J. Humetewa, a member of the Hopi Tribe, is one step closer to becoming the first Native American woman to serve on the federal bench after her committee hearing on Jan. 28 before the Senate Judiciary Committee.

President Barack Obama nominated Humetewa to be a federal judge in 2013.

Sen. John McCain introduced her to the committee on which Sen. Jeff Flake serves as a ranking member. McCain said Humetewa's service to the Hopi Nation, which included work as a prosecutor and an appellate court judge to the tribe, ran deep and had remained a cornerstone of her career.

"It has been said that the Arizona bench 'would be enriched by a member who reflects the community it serves,'" McCain said. "With that in mind, I am particularly excited about our third nominee, Diane J. Humetewa, also to the District of Arizona, in Phoenix. Ms. Humetewa's nomination is truly historic: Being a member of the Hopi Nation, if Ms. Humetewa is confirmed, she would be the first Native American woman to ever serve on the federal bench."

McCain said Humetewa is also a long-time advocate for victims' rights. During law school, Humetewa spent a semester working as an intern on the Senate Committee on Indian Affairs. After law school, she returned to D.C. to work on McCain's staff on that committee - this time as deputy counsel.

Her career at the department of justice included work as a special assistant to the Office of Tribal Justice. In 2007, McCain recommended her for nomination as U.S. Attorney for the District of Arizona, where she served for two years. Humetewa currently works as special advisor and counsel at Arizona State University.

Humetewa said she was grateful to Obama and she thanked McCain and Flake for their support.

"I am deeply honored and privileged for the nomination," Humetewa said.

She said that she was pleased that friends, colleagues and family were with her at the hearing and that her parents were back on the Hopi reservation listening on webcam.

Sen. Mazie Horono (D-Hawaii), who chaired the committee hearing, asked Humetewa how she thought her experience working for the Hopi Tribe would help her as a federal district judge.

Humetewa said her work as a prosecutor and an appellate court judge helped her learn how to be objective and to work in a timely and diligent way.

Flake asked Humetwa about the parts of the Violence Against Women Act and the Tribal Law and Order Act where in limited circumstances tribal courts would have jurisdiction over non-Indians.

Humetewa said that both laws are in their infancy and tribal courts are still looking at how to implement those changes.

Flake asked her about a report she helped to prepare by the Native American subcommittee of the U.S. Sentencing Commission. The report found that Native American defendants were sentenced more harshly by federal sentencing law than non-Native Americans who were prosecuted under respective state laws.

Humetewa said that while she had not worked as a prosecutor since 2007, "I do know that in the research that we looked at that we did find areas where there were disparities... primarily in the assault statutes that applied to Indians in Indian country... the penalties were harsher to Indians who committed various assaults in Indian country than for non-Indians who might be tried and convicted in state courts."

Humetewa said that she believes the value of the report was in providing guidelines for the sentencing commission to seek tribal consultation when modifying sentencing guidelines.

Flake said he grew up in Snowflake, Ariz. near the Navajo and Hopi reservations and he was pleased by her nomination.

"I just have to say for your parents watching at home... they must be extremely proud as your whole state is and your country for the trailblazing way that you're going through this as the first Native American woman to serve on the federal bench, if confirmed."