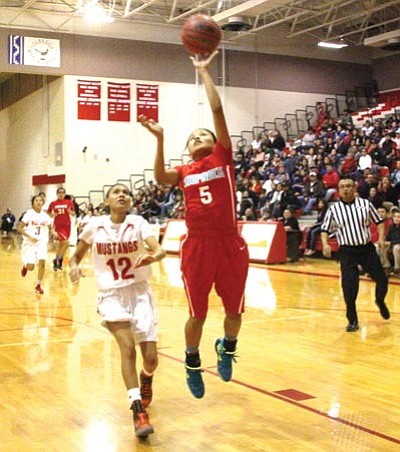 Shiprock’s Melanie Secody (5) scores on a lay-up after a steal while Monument Valley’s Shandiin Sherlock (12) waits for a possible rebound Dec. 23 in Kayenta, Arizona. Shiprock defeated Monument Valley by a score of 70-26. Photo/Anton Wero

The Monument Valley Lady Mustangs (4-4) were not as fortunate as the boys. The visiting Shiprock Lady Chieftains, (7-3) were victorious, 70-26.

"Play hard, score points, be intense - come out and play like a champion," Monument Valley Mustangs head coach Rich Beeler said he told his team in the locker room. "We are looking for a good ballgame tonight, it's an exciting evening The team that makes their free throws and makes the fewest turnovers will win the game."

While in the visitor's locker room, coach Chester H. Atcitty, Jr, said he told his team, "Go out there and entertain the crowd and have some fun."

The Mustang's Thomas Nimrod started the scoring, stealing the ball after the tip and going the length of the court for an uncontested layup. The Chieftain's Rookie Hoskie answered with an NBA three-pointer from the top of the key, taking a 3-2 lead.

The Mustangs' Ty Phillips, Cauy Nelson and Kane Parrish put together a six-point run to take an 8-3 advantage.

"We know we are going to be in for a ballgame," said Atcitty, during a pre-game interview. "We want to come out and take the game to them - we don't want to sit back and see what they bring."

The Chieftains responded every time the Mustangs scored. The teams exchanged buckets through the first period, with the Mustangs outscoring the visitors and taking a 17-10 lead at the end of the quarter.

In the second frame the game went back and forth. The Chieftains slowly cut into the lead and just when things seemed to turn their way, Parrish penetrated the lane for eight points and gave the Mustangs a 30-21 lead.

Hoskie, Andre Joe and Ryan Benally combined for 17 points, but their efforts were defied by the Mustang's Phillips, Nelson, Joshua Young, Kobe Livingston and Ezekiel Ogden, who applied full court pressure to defuse the Chieftain's efforts and hung on to a five-point advantage, 43-38, as the third quarter ended.

With an 8-3 run in the final quarter, the Shiprock Chieftains were able the tie the game at 46 but could not take the lead.

The Mustang's Thomas Nimrod scored the final nine points of the game to keep a two-point win for the Mustangs, 52-50.

Nelson had a game high 12 points, followed by Nimrod with 11 points and Parrish with 10 points.

"Our goal was to cut the lead in half by the middle of the third quarter and we did," Atcitty said. "We cut the lead to three points and tied it, the kids executed very well, we had opportunities' - the ball just didn't bounce our way (tonight). Give Monument Valley credit for what they have done."

Deron Johnson scored 10 points in a losing effort for the Shiprock Chieftains, Joe and Hoskie scored 11 and 10 points, respectively.

"We want to clamp down on defense - put all our energy on defense -we have young people, who have a lot of positive energy and are enthusiastic about playing defense" said Shiprock Lady Chieftains head coach Larson Henderson, "Every time we have an opportunity, we want to push the ball up the court and get some points."

The Lady Chieftain's Lacey Howe, Paige Dale and Shontai Grey combined for a 10-point to none run, quickly putting the game away-taking a lead they would not relinquish. Melanie Secody, Keishonna Begay, Shimika Begay came off the bench, and assembled another run, outscoring the Lady Mustang's Shaniya Cly efforts, who scored six points, with a 14-point run and took control of the first quarter, 24-6.

The Lady Chieftain's swarming pressure defense caused more turnovers and errant passes that led to more scores for the visitors, a total of 24 points - matching their first quarter output and holding the Lady Mustangs to eight points. The Lady Chieftains took a commanding 48-14 lead at intermission.

At the half, with the game well in hand, Henderson said his team was better at getting to the basket and free throw line.

"I was looking to a very intense game, because Monument Valley has a good basketball program," he said. "If we do what we are suppose to do, the game will go our way."

The Lady Chieftain's defense proved to be effective again in the third and fourth quarter, holding the Lady Mustangs to six points per quarter. The Lady Cheiftans scored 15 points and 7 points respectively per quarter and held on for a 70 to 26 point win.

"Playing defense was the key to win tonight," Henderson said. "Playing team basketball - being unselfish, hitting open people in transition and getting open looks, was very enthusiastic for the kids, tonight."

Secody and Dale tied for a game high 15 points to lead the Shiprock Lady Chieftains. The Lady Mustangs were led by Cly with six points.