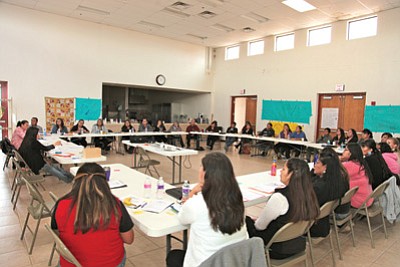 The concepts were born during the HOYI Collaborator and Youth Convening gathering Nov. 13-14 at Hotevilla Youth and Elder Center.

"Proper education regarding the HOYI team was important to share because we are practicing collective impact," he said. "Informing the public about our partners, while also soliciting for new members occurred, which was helpful because this work will take many minds to create effective change for our community."

Knox said the goal is supporting "the building, space, table and chairs for new and established partners to reconnect and align their efforts for the benefit of the youth." He said the work that HOYI is doing cannot work without allowing the community to contribute to what HOYI feels is successful for the youth.

"In order for HOYI's community-driven goals to sustain itself those goals must be defined, designed and be the responsibility of our community - for the community. So, the overall goal was to transition power of HOYI into the hands of the community by allowing them to start the process of defining what they want to see for our Hopi youth," he said.

Knox said through the facilitation and participation of everybody that HOYI succeeded in reaching the goal of empowering the community to begin the process.

"We also had employers present, which was a big win since we are also trying to strategize how to successfully improve the career readiness of our youth," Knox said.

He said the youth voices were heard by the adults and will be carried when HOYI begins implementing the strategies and ideas in the future.

The collaborators came from throughout Hopi ranging from Moenkopi to Spider Mound.

Honani said HOYI was able to gather many area service providers to initiate conversations on how the community can create a system for change and strengthen positive pathways for future generations based on the needs of the Hopi youth.

She said HOYI will support the five working groups that formed to address the needs of the youth.

"We will provide space, chairs, tables, etc., to continue the conversation and action planning for collaborative impact for the youth," she said.

Knox said the work to build up the youth will continue in the villages, schools and youth programs. He said this month many of the groups will start meeting to plan how they will create an impact and HOYI will assist in any way needed.

Honanie said HOYI would like to continue conversations with the youth at the high school to boost morale, graduation rates, student participation and overall support.

"They feel it's important that regardless of what a youth wants to do, college or trade school, that they still need to know how to communicate effectively, ask for a job application, approach an instructor, seek tutoring," he said. "Parents know that they can only do so much for their children, but it takes the individual to accomplish whatever goal they choose."

"I told them that I was thankful for their help and guidance," she said.

Lomabalaquihoya said the sessions she attended were mostly about the high school.

"The best part was learning new and different ways to get ahead in life," she said. "The conference could be improved by having longer times to talk about the ideas for schools. There should also be more student involvement."

Lomabalaquihoya said she would like to see HOYI work with the high school to show students more ways to get help for college. She said the conference was important because now she knows what types of help are available for her in the community. She added that lunch was delicious.

Greta "Little Q" Quotskuyva, a sophomore video and radio news student at Hopi High, said the HOYI conference was important to not only the youth but the adults because she learned a lot from them. She learned about low graduation rates and the group brainstormed many ideas about why they think the graduation rates are low.

Quotskuyva said she told the group about how some students aren't doing well academically at Hopi High.

"The best part of the conference was getting to speak in front of people," she said. "I had the courage to speak and I was not afraid of what I said because people need to hear what the youth want to bring to people's attention."

Quotskuyva said sometimes youth are scared because they don't think anyone will support them.

"But I had a lot of support for trying to make Hopi High School a better place," she said. "Not just for myself, but also for others as well."

"I want to see HOYI have more youth involvement and I want to see them make a difference in the community," she said.

Knox said it is not up to HOYI, but "to all of us" to create the change that people want to see. He said the change needs to be real and substantial so it continues long after HOYI is gone.

Honani said HOYI welcomes the community to join them in this collaboration for impact for the youth.

Knox said it is HOYI's goal to have as many individuals become involved as time goes on and they are interested in working with all interested programs, parents and youth.

HOYI is located at the Hopi Foundation Office in Kykotsmovi. More information is available at (928) 734-2380.