Out and About: Monarch butterfly visits Hopi, finds way to Prescott 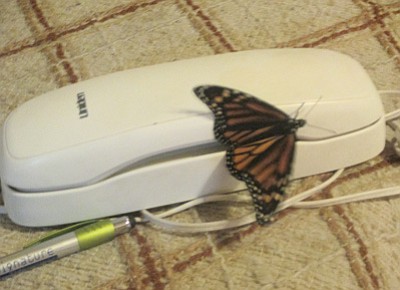 Molly the monarch butterfly recuperates on a telephone. Photo/Stan Bindell

POLACCA, Ariz.-Molly the monarch wasn't in my life long, but three days was enough to have an impact.

As I was walking home from Hopi High School on Nov. 12, the monarch was on the sidewalk and couldn't fly. Something was wrong. The weather was cold and Molly wouldn't make it through the night. That was unacceptable, so she was on her way to my Hopi home.

Her small enclosure included twigs, small branches and leaves. When let out of her container that night, she couldn't fly.

By this time, I had to figure out what to feed her. So, the Internet said either nectar or nectar juice. I didn't have either, but I did have oranges. Putting the orange monarch on the orange was quite the sight. Up until this time, her favorite spot appeared to be on my telephone.

Butterflies have long tongues and I could see her tongue going deep into the orange to get the juice out. She was happy and stayed with the orange for quite awhile.

Maybe I'm reading too much into it, but Molly appeared to like me. When I picked her up, she didn't want to leave my hand. When I put her on my shirt, she would crawl up the arm, but not fly off. I've taken many butterfly photographs on my hikes and always loved butterflies, but never had one for such a long period of time.

Molly was beautiful with her orange colors and white dots. She was amazing to watch.

The next night she was able to fly about four feet and I had to watch that she wouldn't get into anything that would hurt her. I knew she was getting better.

Molly made it to Saturday when I was able to call the Heritage Park Zoo in Prescott because I knew that they helped injured animals. Butterflies aren't exactly animals, but I had hope they would help.

Jenny, the keeper, asked if I was joking when I asked if they took injured butterflies. After I convinced her that I wasn't joking, she said to bring the butterfly in.

So, I dropped Molly off after a warm goodbye. Jenny, the keeper, said they would keep the butterfly in a large warm enclosure, rehabilitate the butterfly and release it.

Two days later, Cathy Palm-Gessner called with great news. Palm-Gessner is a volunteer with the zoo and Southwest Monarch Studies. She told me that she transported the butterfly to Wickenburg where she released it. Molly might stay in Wickenburg, but would probably head to Phoenix where it would be warmer.

Palm-Gessner said butterflies can't fly when it's below 55 degrees so I was right in taking her home that night because she probably would have died. Considering that monarch numbers have been decreasing for several years, saving any monarch is special.

Monarchs fly from Canada to Mexico. They are often tagged and seen in large numbers in California or larger numbers in Mexico.

Knowing that Hopi's have butterfly dances and Butterfly Clans, I had to ask one of my students about what butterflies mean to her.

Greta Quotskuyva, a sophomore concerned about the environment, said butterflies are pretty in spring and summer.

"When spring comes, I like to look for butterflies of all unique designs on their wings," she said. "Butterflies also help the environment when they go to a flower to get nectar and when they leave the flower they pollinate the other flowers, which helps the flowers too."

Quotskuyva said "now a days, out in Hopi, you hardly see any butterflies. I think butterflies are starting to decrease because of our climate change and all the pollution in our earth's system. It may not affect us as human beings, but it affects the animals and the ecosystem. This is what causes animals to go extinct. When the butterflies are extinct, that's bad because we'll have no food, vegetables and plants. Everything will eventually die out."

Quotskuyva said this is a sign that Hopi's need to change their way of living.

"Our butterflies on Hopi are going to be no more if we don't change. When butterflies come back then we'll know that we did our job to keep our environment clean and healthy," she said.

Butterflies are interpreted differently by different people and different cultures, but most people appreciate them. Count me in that group, so I thank the Heritage Park Zoo, Jenny the Keeper and Cathy Palm-Gessner for sending Molly the Monarch on her way.