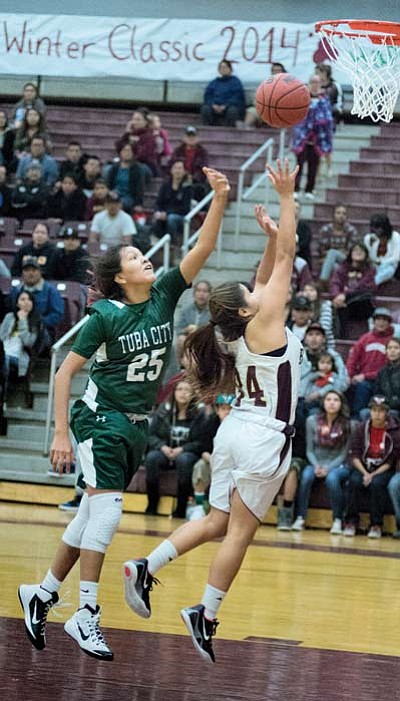 The Lady Bulldogs started a busy week of action with a 53-47 win over the Chinle Lady Wildcats Dec. 16 in Winslow - their last game before the Winslow Winter Classic, which began Dec. 19. The Lady Bulldogs took a 5-2 record into the tournament.

The Lady Bulldogs met Tuba City in the championship game, both won relatively easily in their first two games of the tournament.

The game was not decided until the final seconds expired. Winslow finished with an 8-2 record and Tuba City fell to 8-3. This could well have been a preview of a state championship game.

Both teams had three players on the All-Tournament Team. Shandiin Armao, Jaycey Sangster and Adrianna Singer from Winslow and Samytha Parrish, Autumn Byjoe and Tate Tsingine from Tuba City.

Tuba City started strong and led 14-10 at the end of the first quarter. The Lady Bulldogs fought back in the second quarter and tied the game at 27-27 at the intermission.

After another very close quarter the Lady Bulldogs took a narrow two point 40-38 lead into the final period. Winslow hung on to win the game 53-51 in a very close game. Armao led all scorers with 29 points for Winslow.

Tate Tsingine led Tuba City in scoring. Those were the only players in double figures. Winslow had an advantage at the charity stripe hitting 14 of 26, most by Armao. Tuba City was just six of 10.

The Lady Bulldogs got by the Hopi Lady Bruins 65-34 in the first game on Friday. Winslow led Hopi 20-9 after the first period of play and had a commanding 37-13 lead at the intermission.

The lead was more than 30 points at 57-24 going into the final period, and with reserves playing most of the second half, the Lady Bulldogs coasted to a 65-34 victory.

Armao led Winslow and all scorers with 14 points while playing little in the second half. Laura Gutierrez led Hopi with 10 points. Those were the only two players in double figures although Winslow had more players score and more near the 10 point total.

The Lady Bulldogs advanced to the second round with the win where they met the Westwood Lady Warriors on Saturday morning.

Early on Saturday the Lady Bulldogs hammered the Westwood Lady Warriors 56-37 to advance to the finals. Winslow started strong and used a huge second period to build a commanding 34-10 halftime lead.

The Lady Bulldogs held a secure, double digit lead the rest of the contest on their way to the 56-37 victory. Armao led all scorers with 17 points for Winslow. Sangster and Singer were also in double figures for the Lady Bulldogs with 10 points apiece. Aitza Alvarez was in double figures for Westwood with 10 points. The Bulldogs advanced to play the Tuba City Lady Warriors in the championship game. Tuba City defeated Estrella Foothills 52-31 in the other semifinal game.

Both the Winslow boys and girls teams will play in the Tournament of Champions at Ganado beginning Dec. 26 for their last action of 2014.