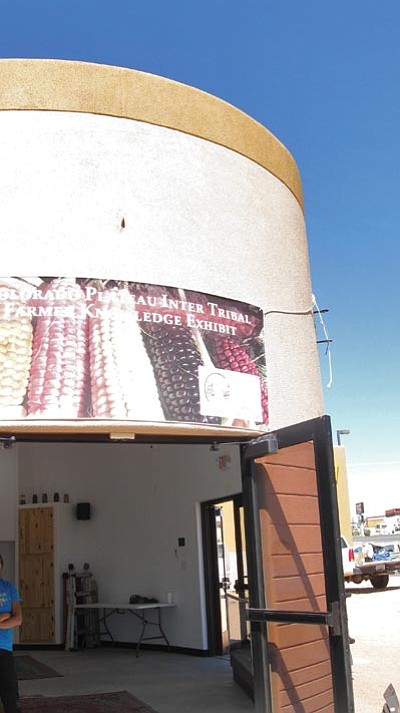 The Cultural Sustainability Pavilion recently opened on the Grounds of the Legacy Inn in Tuba City. Photo/Tyler Tawahongva

UPPER VILLAGE OF MOENKOPI, Ariz. - Unity Through Sustainability put on a grand opening reception recently to celebrate the Cultural Sustainable Pavilion built on the grounds of the Legacy Inn.

A collaboration between Meonkopi Developers Corporation (MDC), Grand Canyon Trust and Shonto Development Corporation (SDC) made the center a reality.

According to Wendy Lewis, program manager for MDC, the building will be state of the art with solar power and electronic controls for screens and video displays. Currently some exhibits are on display but a more extensive learning center for agriculture, language, wellness and other educational programs is in the works. During the harvest season the area is used for a weekly farmers market.

The reception recognized the work of the partners involved in the effort to build the pavilion. It was a collaborative effort by numerous entities. Moencopi Day School's gardening instructor Steve Lomadafkie brought seedlings that the students grew and planted in the gardening area of the pavilion. Shonto Developers Corporation recently provided solar panels for the building that will be installed soon.

John Hopkins was also recognized for supporting the project along with Life Sharing who provided food to the St. Jude's Food Bank.

The Grand Canyon Trust provided much of the material for the exhibit building and planned to provide more materials in the future.

"Everything has to start out small and grow," Moore said. "Nothing comes complete and is like a child that has to gain knowledge and learns as they grow then become productive. When I came back to the reservation I didn't know much about economic development since I had a career as a contractor. However when I was off the reservation I always stated I was a member of the Hopi Tribe. The development of Moenkopi village is a result of the cooperation of people who wanted to go in a different direction, not the wrong direction.

"We never want to lose our culture but have to always respect it but things are moving fast and we cannot afford to be left behind as Native people. We are endowed with the same capabilities and can have the same quality of life as anyone else."

Moore is an active member of the community and sits on the Board of Directors for the Hopi Credit Association as well.