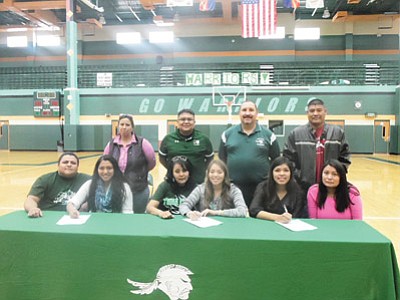 Established in 1985 and located in Maricopa County, Chandler-Gilbert Community College offers more than 50 certificate and associate degree programs in eight departments, which will allow the three students a wide variety of choices for academic careers.

"Coach Ver Hiapo of Chandler-Gilbert community College has been following all three of our girls since they won the Arizona State Volleyball Championship in 2012 when they were all sophomores," Tuba City head coach Harlan Barlow said.

Natoney played for Tuba City for the past four years as a varsity starter. She started as a middle hitter and finished as an outside hitter. Parrish was a third year varsity starter who stands at 5'6." She has played the same position each year. Chee played for two years as a defensive specialist and libero.

"All three girls will head to Chandler-Gilbert with a final end goal of eventually playing at the Division 1 level," Barlow said. "Chandler-Gilbert is a good start for them to get serious experience after high school and prepare them for more competitive playing at the NCAA Division 1 level. I'm extremely proud of each of them, how dedicated they are, how much discipline they have shown to the TC High volleyball program and especially in how close they have become as a team."

Chee, age 18 and the daughter of Annette Granger and Vern Chee of Tuba City, credits her grandmother Ida Lefthand and her aunt Myra Begay and uncles Greg Draper and Jonas Lefthand with all the support and encouragement she needed to succeed at volleyball and academics.

"My aunt Myra has been my guardian as well as my family during high school and she and my uncle Greg have been there supporting me all the way, making sure I had everything, that I was taken care of, so I could concentrate on school and my volleyball practices and games," Chee said. "They have really supported me and I can't thank them enough."

"She's been so wonderful to help raise," Myra said. "Shauntee is really active at school, she's so smart and we encourage her daily, she is ranked right now as number five in her senior class and we are so proud of her."

Parrish, age 17 and daughter of Gwenytha and Sam Parrish Jr., was raised originally in Kansas but moved back to Tuba City in the fifth grade. She looks forward to a career in biology with an end goal of being a anesthesologist.

Parrish played three years of volleyball in high school and feels the scholarship from Chandler-Gilbert College is a really great offer to help her get on her career path.

Parrish said Tuba City High really prepared her for the next step to college along with her mom and her dad and her grandmother who also gave her support along with her uncle, Frank Sage, who has also gone to college for advanced degrees and told her often that if he can do it, she can too.

One of Parrish's role model was Harrison Miles, a coach from Shonto, who constantly encouraged her and gave her the first taste of volleyball competition.

Natoney, age 17 and the daughter of Leta Fatt and Ryan Natoney, is looking forward to attending Chandler-Gilbert and hopes at some point she will come back and coach volleyball at one of the local reservation high schools.

Natoney played volleyball for Tuba City High for the past four years.

Natoney credits not just her parents for their constant love and support but also her math teacher Rae Lynn McCabe, Barlow and her paternal grandmother Agnes Natoni from Hardrock for her success.

"Coach Barlow basically toughened me up and told me to make every effort to do my best, not just in volleyball but also in my school work, to stay eligible, work hard," she said. "My mom and dad were constantly encouraging me too, and even though we live all the way in Hardrock, about an hour from Tuba City, they would travel with me to my games, make sure I did my homework even if it was in the car or if it was late after a game. They have all helped me so much and I'm really happy with the scholarship offer from Chandler-GIlbert. I want to do my best and make sure I take advantage of the chance I have to move ahead in my career goal."