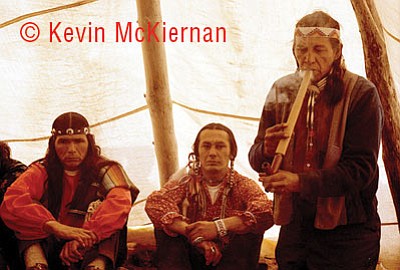 FLAGSTAFF, Ariz. - "Here's a question: can a white guy tell the story of American Indians? Maybe not, but I can tell you what I saw." Those words from Kevin McKiernan, a foreign correspondent and filmmaker, start his new documentary set for release in about a year, "Wounded Knee: A Line in the Sand."

It was 1973 on the Pine Ridge Indian Reservation in South Dakota. Of all Indian reservations in 1973, Pine Ridge was one of the poorest. It was a time of unrest for the country - Vietnam, the assassinations of Bobby Kennedy and Martin Luther King Jr. five years earlier, civil disobedience on the streets and the Watergate scandal involving President Richard Nixon just starting to heat up.

On the Pine Ridge Indian Reservation, violence was rampant. Fear was pervasive. It was thought that the tribal chairman controlled the federal money and employment opportunities, limited as they were, at the expense of most people on the reservation. He also had squads called Guardians of the Oglala Nation (GOONs) that harassed anyone who criticized the tribal chairman.

"People don't understand the climate of fear that existed at that time, that people on the tribal council, who were trying to, who were criticizing the tribal chairman, were followed home at night by police cars and threatened and it was intimidating to them," Roubideaux said. "People were so afraid, that's what made the decision for them to do this thing that they did at Wounded Knee."

Wounded Knee already had a bloody history as the place where the 1890 massacre of Lakota Sioux by the U.S. Army took place, killing women and children. It is where the American Indian Movement (AIM), which was founded in 1968 by Russell Means, Clyde Bettencourt and Dennis Banks, among others, confronted U.S. Marshalls and the Federal Bureau of Investigation (FBI) in a 71-day occupation. The event drew attention to the poor living conditions and years of mistreatment by federal and local agencies. The Pine Ridge Indian Reservation is also the site where two FBI agents were killed in 1975. Leonard Peltier is serving two life sentences for their deaths.

After the 71-day siege, two American Indians were dead, two federal agents and 18 Indians were wounded and more than 500 were arrested. McKiernan left in handcuffs.

McKiernan, a cub reporter in 1973, sneaked behind the federal government lines that surrounded Wounded Knee, spent two months away from his family in the line of fire from federal agents. He was assaulted by vigilantes but had a view from the inside of the occupation while all the other media had been embargoed. He said he had stumbled on the great American Indian civil rights movement of that time.

"And that was a very emotional and searing experience and I don't think I recognized it as much as I do in retrospect," he said.

Behind the lines, McKiernan saw what happened after the media was cut off, the firefights that lit up the sky like the Fourth of July.

"The most dramatic thing was the big fire fights that came after the news, after they had no reporters there to report it then they really poured the firepower in there," he said. "Those federal bullets didn't discriminate, because I was white and that was something."

"That's an extraordinary number," McKiernan said. "I don't know any time in the history of this country outside of the Civil War that anything like that has happened. And this was out in the middle of nowhere, so there was nobody to observe it."

McKiernan also saw the whole cycle of life. He saw people die, people wounded, babies born, a traditional ceremony and a wedding. Those experiences all changed him irrevocably.

"It was a real loss of innocence about the world," he said. "To see someone shot, to see another killed. To realize how serious this was and it was not some story I read about. I was in it."

But he also learned that although he was a stranger, he was welcomed and looked after in ways that he was to experience later in life in Iraq or Turkey and other places he covered conflict as a journalist.

"I will never forget these people," McKiernan said. "These hovels that I went to were literally tar paper shacks and I would come in and say hello...I'd sit down at a table and somebody would smash a coffee cup down with black coffee... the next thing was to always say, 'You eat yet?' That stuck with me too, that you were a stranger in a strange land but they were doing their best to change that."

McKiernan believes his film will provide one truth about the occupation even while others seek to discredit what happened or what came about because of it. In the years following the occupation, the federal government passed legislation that affected Indians throughout the country - the Indian Self-Determination Act, the Indian Child Welfare Act and the American Indian Religious Freedom Act. The preservation of language, children and land are still fights that continue for American Indians today.

A new book called "American Indian Mafia" by Joseph H. Trimbach, who was the FBI special agent in charge during the occupation, calls into question the history surrounding Wounded Knee and its AIM leaders, exposing their "dirty little secrets" on their way to "personal gain, fame and fortune."

The website for the book said that the legacy of the Pine Ridge Reservation is haunted by the forgotten suffering of innocent victims and a falsified history found in almost every library in America.

McKiernan said not all AIM members were saints and that as a reporter he had to acknowledge the warts as well as everything else. He said there has never been a freedom movement for any race or people that has not had people who did bad things. But those bad things do not outweigh the change that came about because of the occupation.

"The problem I had with the book was that it seemed to be trying to settle scores," he said. "So that even if individual instances of misconduct or worse were true, it was amplified way beyond those instances, to sort of use a big brush to tar a complete civil rights movement. And I thought that was wrong."

The change that McKiernan saw on the front lines of Wounded Knee from people whose names were never in the headlines, who did not go in front of TV cameras, who never made a name for themselves, was a ray of hope.

"Probably the most smashed people in the whole U.S. who, suddenly somebody just said, 'No, we're not gonna take it, no, and they meant it,'" McKiernan said. "I guess I never met a people who meant no when they said no. And that gave me the title of the film, "A Line in the Sand," can't do it anymore. And that is something I never forgot."

More information about the film is available at https://www.kickstarter.com/projects/1907846287/wounded-knee-a-line-in-the-sand-documentary-film.