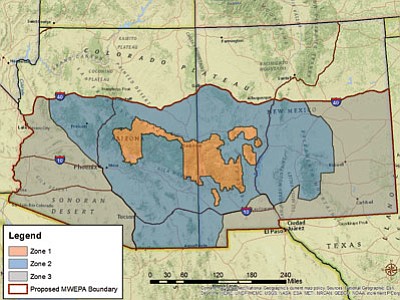 PHOENIX - Under a new plan from the U.S. Fish and Wildlife Service, the endangered Mexican gray wolf would have a lot more room to roam in Arizona and New Mexico. That is, as long as it doesn't cross Interstate 40.

Michael Robinson, a conservation advocate with the Center for Biological Diversity, called the I-40 limit a "bureaucratic Berlin Wall for wolves" created under pressure from state governments and the livestock industry.

"Wolves are banned from going into the Grand Canyon ecosystem and the southern Rocky Mountain ecosystem (in New Mexico)," he said. "Scientists have identified those two ecosystems as places wolves will have to occupy in order to recover."

In a draft Record of Decision released Tuesday, the agency outlined its intent to gradually extend the wolf's territory in Arizona and New Mexico farther west and east - eventually reaching the Colorado River and the New Mexico-Texas line - as well as south to the U.S.-Mexico border. According to the proposal, this phased approach could increase the number of wolves living in the wild to between 300 and 325.

Mexican gray wolves, native to Arizona, New Mexico, Texas and Mexico, were hunted to the brink of extinction and gained protection under the Endangered Species Act in the 1970s. The federal government began releasing captive-raised Mexican gray wolves into the wild in 1998.

At last count, 83 Mexican gray wolves were living in the wild.

According to Robinson, the Fish and Wildlife Service has repeatedly ignored scientific standards for achieving wolf population growth ever since it developed a stopgap recovery plan in 1982 when the wolves were in imminent danger of extinction.

"The Fish and Wildlife Service repeatedly said they're developing a plan for recovery but they never actually finished the job," Robinson said. "There's no end goal in it."

Sherry Barrett, Mexican wolf recovery coordinator for the Fish and Wildlife Service, said the preferred plan provides for the growth of the wolf population while also giving the agency flexibility to address any wolves that are causing nuisance to livestock or other wildlife. This could include harassing wolves with rubber bullets or even killing the animals.

Barrett said the agency is currently only focused on improving the wolf population south of I-40.

"Any further expansion into the future will be directed by a recovery plan, which we'll be developing after this process," she said. "It will likely require additional populations - where and how many wolves will be determined at that time."

The agency's final record of decision is due in early January, after a 30-day period for public comment.

Timothy Preso, an attorney with Earthjustice, said the Fish and Wildlife Service is working backward by approving a management plan before a recovery plan. His organization filed a lawsuit earlier this month on behalf of conservation and environmental groups alleging that the agency has failed to produce a valid wolf recovery plan.

"It's like you're starting to construct the house without the blueprint done," he said.

According to Preso, a recovery plan would include actions to ultimately remove the Mexican gray wolf from the Endangered Species Act, whereas a management plan maintains the population. He said Tuesday's proposed management plan doesn't actually detail how the agency plans to triple the number of wolves in the wild.

"They still haven't put forth a plan of how they hope to get there," Preso said. "It's not possible without the Grand Canyon region."

Regina Mossotti, director of animal care and conservation at the Endangered Wolf Center in Missouri, said the Fish and Wildlife Service has failed to reevaluate and reform its recovery plan for more than 30 years after the Mexican gray wolf was placed on the endangered species list in 1976.

"Their goal was to reach 100, they still have not reached that goal," she said.

Mossotti said she understands the need to protect small farming and ranching operations, where the loss of one cow can greatly damage livelihoods, but disagrees with allowing ranchers and federal agents to shoot and kill wolves. Predatory carnivores accounted for less than 6 percent of livestock losses in 2010, according to U.S. Department of Agriculture data.

"But any increase in the ability to shoot or remove any species that is endangered, I don't know how that can be good," Mossotti said.

Predators like wolves, she said, are essential to maintaining the delicate ecology of national parks in Arizona and across the nation.

"They affect everything from butterflies and songbirds to microbes in the soil," she said. "When every piece of the puzzle's not there, you don't get the full picture."