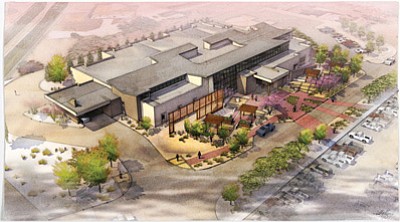 WINSLOW, Ariz. - The Winslow Indian Health Care Center (WIHCC) will play host to the grand opening of its new medical office building from 8 a.m. to 1 p.m. (MST) on Sept. 12 at its campus in Winslow.

The event will feature a fun walk, guest speakers, entertainment, a ribbon cutting ceremony, lunch and a new tour of the facility.

The new 35,500 square foot facility was built at a cost of $16.8 million and took approximately 18 months to complete. No federal money was used to build the new medical office building. An agreement was put in place by WIHCC and the Indian Health Service to construct the facility on federal land.

A master plan is in place for future development in Winslow, and for facilities in Leupp and Dilkon.

Sally N. Pete, chief executive officer for the center, said she is happy for the improvement of services and the raised standards at WIHCC.

"The staff and board of directors are proud to open this new facility for the benefit of our patients and the communities we serve," Pete said. "With this new state of the art facility, we know the Winslow Indian Health Care Center leads the way in health care excellence. We are committed to providing only the highest quality services."

WIHCC has a long history. In 1932, the main hospital building at WIHCC was built as a tuberculosissanatorium and was converted to a hospital in 1948. In 2002, WIHCC signed a contract with the Navajo Area Indian Health Service to provide healthcare services under the P.L. 93-638 Title I contracted corporation. In 2010, WIHCC became a Title V entity and gained self-governance status.

The Accreditation Association for Ambulatory Health Care accredits the center. In 2013, the number of patients visiting WIHCC numbered 172,302 with 14,819 including dental visits. There are 350 staff members compared to 180 in 2002. Its operating budget is more than $49.8 million, compared to $17 million in 2002.

WIHCC operates on a family medicine model and Patient-Centered Medical Home, and provides health care services to all Native Americans, as well as their beneficiaries and dependents.