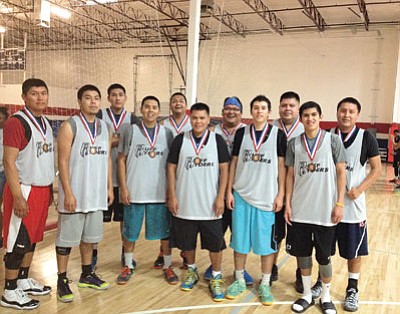 The annual Grand Canyon State Games-Lori Piestewa event is a multi-talent Olympic festival for Arizona amateur athletes of all ages and abilities. This year is the 13th Lori Piestewa games. The basketball champs for 2014 are the Ruff Ryders, coached by Olin Tsingine.

The games are an Arizona Sports Council project with 47 states participating. The Ft. McDowell Yavapai Nation plays host to the event and partners with the Salt River Indian Community and the great Fountain Hills community as well.

Tsingine's Ruff Ryders have been in existence since 1994. Each year the team is made up of mostly Navajos and Hopis who attended Rez high schools and metro area high schools who are going to college or work in the Phoenix metro area but still have a serious love for the game of basketball. This years' winning team also included members of the Sioux and Ute nations.

According to Tsingine, the 2014 champs all played high school basketball successfully and still want to compete but can't devote their full time to the sport. The event is a good way to continue to compete with other Natives who have the same hard driving competitive spirit.

The Lori Piestewa Games is a four-day event at Ft. MacDowell with Native teams from all over the state competing in cross-country, wrestling, volleyball, baseball, basketball and track and field.

Tsingine is a full time jewelry artist who comes from a long line of serious basketball players in Tuba City, Arizona who have won basketball state championships at Tuba City High School.

"I've been all over the world with my jewelry art work - Tokyo, Osaka, Sydney, Paris, London, Venice and Ciro, but nothing beats going to battle with my brothers at a basketball tournament. This was a terrific win," Tsingine said.