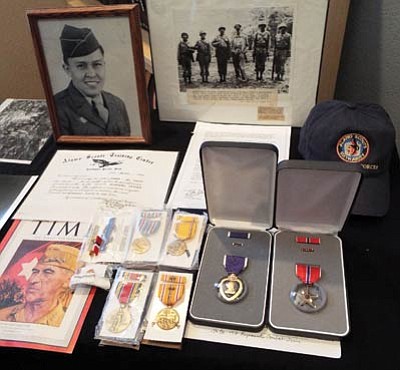 MOENKOPI, Ariz. - It was long overdue but still a memorable day for the family of Ssgt. Byron L. Tsingine Sr., originally from Coppermine, Arizona.

The Alamo Scouts were originally organized on Fergusson Island, New Guinea in November 1943 to conduct reconnaissance work. The group was a Sixth U.S. Army Special Reconnaissance Unit during World War II under the command of Lt. General Walter Krueger, Commanding General in the Southwest Pacific Theater.

Kruegar, who loved San Antonio, Texas and the Alamo, named his scouts in honor of the Texas landmark. Krueger envisioned small teams of highly trained soldiers who could operate behind enemy lines and provide both intelligence gathering and tactical reconnaissance.

The Alamo Scouts are best known for their role in liberating American prisoners of war from the Japanese Cabanatuan camp near Cabanatuan, Nueva Ecija, Phillipines in January 1945.

The Alamo Scouts are credited with conducting a total of 106 missions during World War II behind enemy lines.

Two of Tsingine's sons, Buddy and Larry Tsingine, were on hand to accept his medals along with their mother Pauline who is a member of the Hopi Tribe, Tobacco clan from the village of Hotevilla.

Tsingine was wounded during his army assignment and sent home in January of 1945 making three separate stops at various hospitals on his way home back to the Navajo reservation. His personal effects and original medals were lost along the way.

Tsingine's widow said her husband was never really concerned about material items so they never thought much about getting a duplicate set of medals to replace the ones originally issued to him when he left the service. Tsingine married Pauline, who was a nurse at the hospital where he was treated while he was still on crutches, in 1947.

But one of Tsingine's sons, Ward Tsingine, went to the Hopi Veterans Office and got assistance from Clark Tenakhongva, a counselor technician with the Hopi Veterans' Mobile Center, to apply for a new set of medals that had long been lost. With Tenakhongva's help, Tsingine's family was able to get not only his original set of medals but also the 1988 Special Forces - Alamo Scout medal.

The Navajo Hopi Honor Riders provided a full escort to Tsingine's widow and family members from their home in north Tuba City to the southside Western Agency Veterans Center to show their appreciation for Tsingine's long overdue recognition.