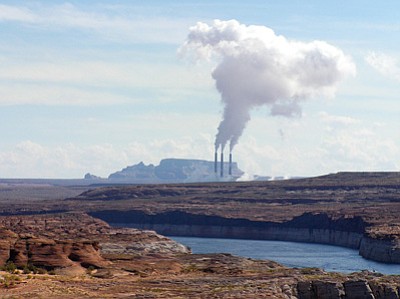 FLAGSTAFF, Ariz. - On July 28, the Environmental Protection Agency (EPA) finalized its rule for reducing harmful emissions at the Navajo Generating Station (NGS) accepting an alternative proposed by a technical working group in place of the EPA's recommendations.

The plan calls for reducing nitrogen oxides (NOx) emissions by about 80 percent by 2030 and is intended to improve the haze that spreads over nearby areas including Grand Canyon National Park and 10 other national parks and wilderness areas by 73 percent.

The EPA regulates harmful emissions from coal-fired power plants under the Clean Air Act. The U.S. Supreme Court upheld the EPA's authority to do so earlier this year. Under that act, Congress set a long-term, mandatory goal of restoring visibility conditions in numerous national parks and wilderness areas throughout the U.S. These areas are known as Class I areas. The Act's Regional Haze Rule requires the use of Best Available Retrofit Technology (BART) at older coal-fired power plants to reduce haze and improve visibility.

The EPA exempted NGS from rules recently put into place for new coal fired power plants because NGS is located within the Navajo Nation and while the EPA considered the proposal put forth by a technical working group (TWG), which was been finalized last week.

"By cutting pollution from NGS, millions of visitors will see the magnificent vistas of the Grand Canyon with greater clarity," said Jared Blumenfeld, EPA's regional administrator for the Pacific Southwest. "This flexible and practical solution will also generate critical tribal revenues, improve public health, provide long-term certainty to power and water utilities and set the stage for a transition to a clean energy future."

The proposal by NGS owners and other stakeholders involved in the technical working group, calls for shutting down one of the three units. In exchange the owners would have until 2030 to install selective catalytic reduction scrubbers on the other two units.

Two of the six owners, the Los Angeles Department of Water and Power and NV Energy, who collectively own one-third of the plant, have indicated they plan to divest their interest in NGS. The other owners are the Bureau of Reclamation, Arizona Public Service, Tucson Electric Project and Salt River Project.

In Feb. 2013, the EPA issued a proposed rule for NGS, which required strict controls and the installation of equipment (selective catalytic reduction technology) by 2018 to reduce NOx on the three units. The EPA encouraged alternative plans and the owners took them up on the offer, resulting in the technical working group's proposal to reduce emissions as an alternative to BART, which owners contend would have been too costly.

In its decision, the EPA acknowledged advocates arguments that NGS is significant to the region citing the impact on current users who rely on the power plant for power. A portion of the power generated by NGS pumps Colorado River water to tribes, agricultural users and municipalities; the remaining power is sold to support tribal water settlement agreements.

"Recognizing the importance of NGS to Arizona tribes, the EPA plan gives the remaining owners a flexible timeline to address ownership changes while meeting the emissions reductions required by the Clean Air Act," the EPA's press release said.

Mike Hummel, associate general manager and chief power system executive at Salt River Project, said NGS owners are pleased that the EPA incorporated the technical working group's proposal into the final rule, adding they will continue to work with other NGS participants on the agreements that are necessary for Los Angeles Department of Water and Power and NV Energy to exit the plant.

"[The rule provides] the necessary time for the installation of additional controls [that] will allow for continued operation of the plant and the benefit it brings to our customers, the Navajo Nation and the state of Arizona," Hummel said.

Navajo Nation President Ben Shelly said that the federal action balances the need to improve visibility in the Southwest and to maintain the continued operations of the Nation's primary economic engines.

"I sincerely appreciate the EPA's decision to recognize the hard work of the technical work group and to incorporate the understanding of the parties who are most impacted by this federal environmental regulatory decision," he said.

Opponents believe that the rule does not go far enough and fails to protect clean air and exempts NGS from safeguards, which will allow the plant to continue polluting for decades instead of cutting harmful emissions by 85 percent in the next five years.

"The Navajo people are poorly served by today's decision, which delays environmental justice for our homeland," said Lori Goodman, board member of Dine Citizens Against Ruining Our Environment. "Our communities suffer so that people in Phoenix and elsewhere can have cheaper water and electricity - for which we pay dearly with impacts to our health and environment."

However, Stephen B. Etsitty, executive director at the Navajo Nation EPA said the recommendations from the EPA were the best possible of all the proposed alternatives that were "better than BART."

"This alternative not only saves crucial jobs and keeps vital revenue on the Navajo Nation, but opens the door to new low-emitting energy development pursuant to the agreement," he said.

Opponents of the proposed rule include national park advocates. NGS, which is a 2,250 megawatt coal-fired power plant, is about 20 miles from Grand Canyon National Park outside of Page, Arizona. The EPA said that NGS is one of the biggest sources of NOx emissions in the country.

Kevin Dahl, of the National Parks Conservation Association said that the decision fails to give local people and the national parks clean air protections they've waited decades to have.

"EPA's decision is unconscionable," he said. "[Monday's] decision is especially disappointing because the Grand Canyon is one of America's greatest vistas, and NGS is one of the worst power plants. For these reasons, it will not stand."

The EPA's rule goes into effect 60 days after it is published in the federal register, which the EPA expects to happen in two to three weeks.