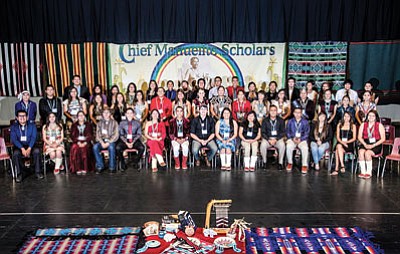 The high-achieving students from across the Navajo Nation and as far away as Chandler, Las Vegas, Farmington, Flagstaff, Gallup and one home schooled student each introduced themselves in Navajo at the annual Chief Manuelito Scholarship banquet July 18 and told proud parents and friends where they intended to go to college.

Navajo Nation Vice President Rex Lee Jim, a graduate of Princeton University, told the students that his 101-year-old grandfather once told him he wished he could live another 10 years. Why, Jim asked him?

He told the students that some people think they know everything once they get their degree or a Ph.D.

"I don't want you going that route," he said. "Be like my grandfather, 100 years old and still be willing to learn.

The Chief Manuelito Scholarship was established in 1980 to provide scholarships to high achieving Navajo high school graduates. They are awarded based on ACT/SAT test scores and final high school grade point average.

Once in college, they need to maintain a 3.0 GPA and be a fulltime student. If they do, they can receive their scholarship for four years.

Jim presented both Peabody Energy and Salt River Project with a plaque in recognition of their more than $5.24 million financial contribution to the scholarship program since 1987.

Both contributed $5,000 for this year's banquet.

Keynote speaker Mariah Nicole Claw of Chinle is a student at Dartmouth College in Hanover, New Hampshire, and a Chief Manuelito Scholar who will graduate in 2015.

She told the scholars that they are now part of a special fellowship.

"Each one of you has earned the honor of calling yourself a Chief Manuelito Scholar, which, of course, includes a very pretty monetary reward," she said. "This scholarship, this gift, that you will be receiving should not be taken for granted. This award is far more than financial assistance. It is the manifestation of one of our great leader's wishes."

She said even though it has been almost 150 years since Chief Manuelito spoke about education, the Navajo people are still atop the dry mesa he described and the greater society still has a hold on many of the things Navajo people need.

"I firmly believe that if we are to see positive changes in our communities, we must assume responsibility, for we are the future of the Navajo Nation," Ms. Claw said. "We are the generation that has access to a college education, unlike our grandparents and parents. Whether we hope to become doctors, engineers, lawyers, educators, or whatever else, this scholarship is a means to lifting ourselves out of our current state as a struggling nation."

She reminded the students, "T'aa hwo' aaji t'eego (It's up to you). I believe in you. And I know that you will make every person who is on your team so very proud."

Navajo Nation Council Delegate Dwight Witherspoon who served as emcee advised the students to learn their college's system to be able to graduate as soon as possible. Just as important, he said, is to not be afraid to seek assistance when they need it.

"Learn to ask for help," he said. "Don't hide things and keep it hidden from parents or professors, from colleagues, from friends. There are places on campus where you can get help, tutoring, advice, encouragement. Many people have gone through what you're going to be going through and certainly they are there to be able to help."

With some schools' tuition costs from $20,000 to $50,000 per year, he said they should get good at applying for other scholarships besides the Chief Manuelito Scholarship. Some scholarship programs don't receive enough applicants for their funds.

He added that their first semester grades will determine the availability of hundreds of other scholarships they can apply for.