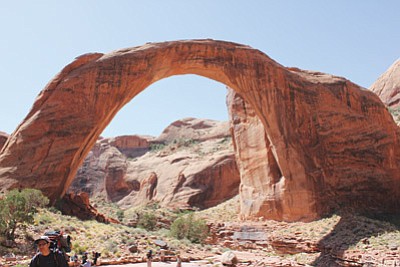 Hikers young and old make their way past Rainbow Bridge National Monument in Utah. This year will be the 32nd annual hike that Earl Riggs leads. Riggs said the hike is a way for younger Navajos to connect with their culture. Submitted photo

What began as an excursion of a few friends and their families from the communities of Tuba City and Moenkopi, has now evolved into a much larger and coordinated effort. Hikers from Europe, Asia and South Africa are now interested in the hike but most participants come from the Navajo and Hopi nations.

Riggs said that he never intended for the hike to become an annual event. He discovered the first year that the 20-mile hike was harder than he thought it would be.

"I hated myself after that first hike," Riggs said. "I swore I was never going to do that again. It took it out of me. I was not in shape for one thing. And here it is my 32nd year."

He said the hike is about three days of being together with different generations who all have an important contribution to make. The young people hiking learn some history from stories that are told along the way.

"We talk. They go through some pain and we talk away their pain," Riggs said. "The old saying is still true. A young kid, a grandkid tells their grandfather, 'tell me something,' and the grandfather has no choice. He has to. He tells stories until they go to sleep. That is our tradition. I know that every Navajo knows that and the Hopi have the same thing. The grandparents respect the young and the young respect their grandparents."

Riggs explained why the route ties to Navajo history.

"Kit Carson never found some Navajos to take them on the Long March because they sought refuge in that canyon," Rigs said. "Some of the kids don't know that."

He said the opportunity to get not only himself but also the kids inspired to walk in nature and to absorb the history and culture of stories told along the way is an important part of the journey to Rainbow Bridge.

"For a race and a people that don't have a written language, that's amazing. The songs, the dances, the culture...we have a culture that just goes way, way, way, way back," Riggs said. "Basically it is an appreciation for the other and that is what I see the [hike] as doing, fostering that."

One of the stories that Riggs may tell the kids is what Franciso Pizarro said to Queen Isabella when he went back to Spain.

"He wrote down and said, 'you know we ruined a perfect people. They were honest. They didn't have disease,' you never learn that in history and we're a part of that," Riggs said. "The kids need to know that and become aware of it and get back down to basics and think about having a good healthy life. We're just one of the groups, with 30 or 40 volunteers who try to foster that."

Riggs said the kids do respond and learn what he and the other volunteers who put the trip together are trying to teach.

"The comments I've heard from some of the kids is, 'now I know what you see. All those words came to life and we're experiencing it first-hand,'" Riggs said. "That makes you stop just for a minute."

But it is not just spiritual lessons that Riggs gives to those who participate in the hike. The organizers try to provide an opportunity for youth from low socio-economic homes to experience, learn about and enjoy the outdoors. They want to emphasize the importance of lifelong physical activity to the kids and create respect for the environment and healthy active living.

"It's an annual thing and anyone who appreciates nature just needs to know we do something like this," Riggs said.

Organizing the hike is a complicated endeavor done with the help of volunteers. Riggs is spending time rounding up donations and sponsorships for the kids to go on the trip. He said his group is about halfway there with less than a month left to go. He said that kids are never turned away but it does take help from the community. The estimated cost for each hiker is $50, which includes the cost of a one-way boat ride from Rainbow Bridge National Monument to Antelope Point Marina.

More information about the trip is available at hikerrainbowbridge@gmail.com or on Facebook by searching Rainbow Bridge Hiking Group.