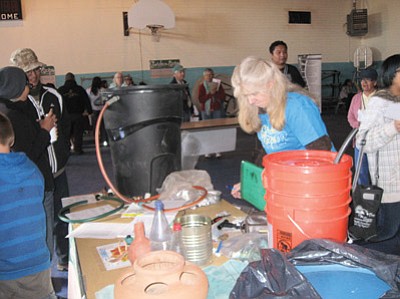 TUBA CITY, Ariz. - On March 25 local organizations collaborated under the guidance of the Tuba City Regional Health Care Corporation Diabetes Treatment and Prevention Services to put on a Garden Expo at St. Jude's Church to highlight the importance in cultivating gardens to help contribute to the overall health of individuals and bring resources to community to assist.

"There is a push to garden and farm in the community," he said.

Many different organizations attended the event including Steven Lomadafkie from the Moencopi Day School Greenhouse. He spoke of the importance of teaching students the value of gardening.

"Right now it is a special (program) but hopefully it will be part of the curriculum someday by enhancing the math and science aspect of gardening," he said.

He mentioned that Arizona Highways published a story on the greenhouse in the November 2011 issue. He mentioned that students enjoy the garden since it takes them out of the class and gives them a new thing to learn. He stressed gardening can teach about the environment, botany, biology and other fields of science. He has taught the gardening project since 2007 and has seen the program become a success.

Members of the Grand Canyon Trust attended the event as well. Kyle Knox made a presentation to local students and at the expo on seeds. Knox said "there are three types of seeds: hybrid, heirloom and genetically modified."

Heirloom seeds are seeds such as Hopi blue corn that have been planted for centuries. Hybrid seeds are a mixture of two food types to create a particular food. Then there are the genetically modified (GM) seeds, which are seeds whose genes and chromosomes have been altered to create a particular type of food. Controversy surrounds GM foods and certain countries have banned GM seed farming and some states and cities are attempting to enact their own laws to prohibit GM foods and seeds in their areas.

"Genetically modified organism (GMO) seeds cannot be replanted and are usually purchased in stores," Knox said. "Heirloom seeds have been planted for generations and can survive like the native people"

Alicia Tsosie from the Grand Canyon Trust works with Knox to bring information sessions to different communities through a grant from the Colorado Plateau Foundation. The two have been to Flagstaff, Zuni and Tuba City to spread the message about seeds. They are available for presentations and hope to talk to more people.

The Diabetes Prevention Program had a booth and performed health screenings for blood sugar levels. Clarrissa stated that "garden products have low sugar content compared to can foods which contain a lot of sugar. Ultimately fresh foods are better for diabetics."

The St. Jude's Food Bank, which distributes 50-60 food boxes daily to residents of different communities from the Hopi and Navajo reservation, encourages self reliance.

"We help teach healthier cooking of food in the box as well as encourage self reliance by encouraging people to grow their own food," said Trudy Billy, manager of the Food Bank.

Caitlyn Hatell, a Food Corps service member, sampled her quinoa salad. Quinoa is a grain that has been cultivated in South America for thousands of years. Hatzell encouraged visitors to experience new types of foods. Many individuals wanted to know more about quinoa and how to cook it after sampling her salad.

The John Hopkins Project was on hand to encourage individuals to cultivate by participating in their community farm project in Kerley Valley. Jess Luna said they have more participants this year.