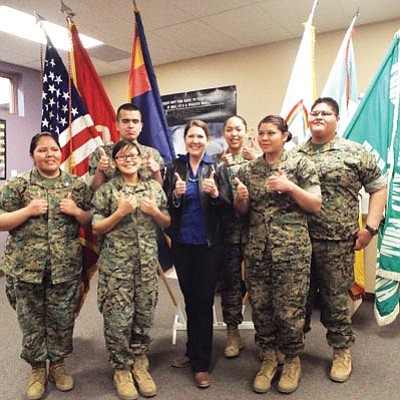 Kirkpatrick said she has a special interest and relationship with Arizona tribal people because she was born in McNary, Ariz., which is near the White Mountain Apache Reservation, and grew up with Native people in her hometown.

Kirkpatrick maintains one of her four congressional offices in Flagstaff.

Kirkpatrick said she is interested in veterans' rights, including health and benefit issues, and has sponsored seven bills in the past few years, five of which have passed including a bill that would increase disability compensation for veterans with service related injuries or disabilities.

Kirkpatrick sponsored a bill in February 2009 to resolve water rights claims for the White Mountain Apache and also advocated for congressional money to rehabilitate land on the Navajo reservation that had been under a construction ban because of the Bennett Freeze dispute. She supported the legislation to "lift that construction ban" in the name of humane and safe treatment for its residents.

Kirkpatrick discussed military job opportunities and shared information with students on how to use their high school ROTC experience to help them go to college.

Kirkpatrick also took the time to explain a bit about United States civics and how the congressional process works within the two houses of Congress. She discussed the role she plays in introducing new bills and laws.

The final portion of Kirkpatrick's visit included a brief presentation by one of her aides. Ron Lee, a Navajo tribal member, told the students that through his work with the congresswoman he has had the chance to see how everyday citizens can make a difference in government or local community relations as well as the opportunity to help draft bills and research information.

Lee also spoke about intern possibilities for interested students and gave various examples of ways that potential aides can assist in a governmental setting.

Kirkpatrick also gave the Tuba City High MCJROTC students information on how the government can help fund their on-going careers and how they can apply for government funding to help pay for additional schooling.