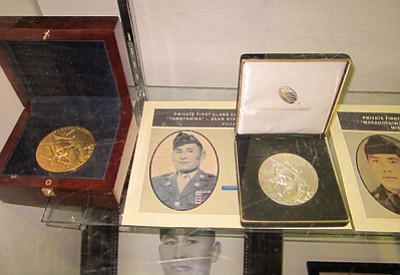 Medals that family members of deceased Code Talkers received at a recent ceremony in Washington D.C. were on display. Katherine Locke/NHO

KYKOTSMOVI, Ariz. - Ten Hopi Code Talkers and their families were honored April 23 for their service during World War I and II at an inaugural recognition day that took place at the Hopi Veterans Memorial Center.

Hopi Tribal Chairman Herman Honanie said it was a grand day to pay recognition and to celebrate the achievement and successes that the 10 individuals brought to the Hopi tribe.

He said the men went to war not knowing what their role or mission would be or how that service would impact the world today. Honanie said the recognition day was a way for the community to celebrate the 10 men but also to remember the liberties and rights that the United States Constitution gives each individual that the men fought for.

"I feel these 10 men, 10 young men at the time, 10 brave men who sacrificed their time, who sacrificed being away from home, from family, from tradition and from culture," Honanie said. "Having that time to spend away in an experience that impacted their lives in such a way that many of us will never, ever imagine or can imagine or will ever experience. As a people we owe them so much."

On Nov. 20, 2013, the Hopi Code Talkers were officially recognized in Washington D.C. at an event that was streamed live back to the Hopi reservation. The families of the Code Talkers were present. Clark Tenakhongva, a U.S. Army veteran, presented a slide presentation of the trip to the crowd gathered at the veterans' center.

Bruce Talawyma, a veteran from the U.S. Marine CORPS, was the Master of Ceremonies. Lori Piestewa Post No. 80 American Legion members and other color guards posted the colors. Honanie participated in a wreath laying ceremony. Telisha Poleahla, the Miss Lori Piestewa Post No. 80 Princess, led the crowd in the Pledge of Allegiance. A traditional meal was served to the families and other veterans and guests that attended the recognition day.

Every year a specific Hopi Code Talker is honored. This year it was Percival Navenma. He was born on Sept. 17, 1921 and was from Mishongnovi Village. He was inducted into the United States Army on Sept. 23, 1942 and served with the Headquarters One Batalllion 323 Infantry. He was honorably discharged on Jan. 30, 1946.

Lloyd Navenma, a family member, spoke about Percival and said the family remembers him as a very humble man who enjoyed teaching his Hopi culture.

"He used to sit us down and talk to us and tell us right from wrong," Navenma said. "When I look back at it this is probably what his teaching were from his experience when he was in the military. What was taught to him, the rights, the wrongs."

Navenma said that Percival never spoke of being a Code Talker and it was only recently that Navenma was even aware of it.

"I don't think he really mentioned a lot of what he did in the military to his family," Navenma said. "Just recently learning about all that he did for us, that really brings a lot of pride to our family."

The great-granddaugter of Floyd Dann Sr., Alandra Duyongwa, who was present in D.C. when the Code Talkers were officially recognized, performed a song in remembrance.

During the ceremony in Washington D.C. in November, former Hopi tribal chairman LeRoy Shingoitewa said the last of the Hopi Code Talkers passed away about 18 months prior.