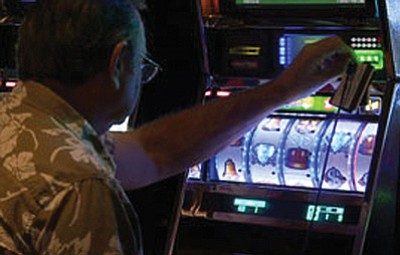 WASHINGTON - Indian gaming revenue in Arizona grew by 3 percent in 2012, even though no new facilities came online and the number of games in the state actually declined that year.

That was a faster growth rate than the average for the nation, where tribal casinos saw a 2 percent increase in revenues, rising $500 million to $28.1 billion in 2012. Arizona was sixth among states for overall revenues in tribal casinos and 14th for the rate of growth, the report said.

Calls to the Arizona Indian Gaming Association and to several tribes with gaming facilitates in the state were not returned. But other experts pointed to several possible factors behind the increase.

Bob Ellsworth, an instructor for gaming management at the University of Nevada, Reno, said it could be that "the head count ... either that has increased or ... how much each player spends - puts at risk - has gone up. Or it's a combination of both."

Ellsworth said those changes could have led to the decrease in the number of games: From 2011 to 2012, the number of machines in Arizona tribal casinos fell by 1.4 percent, and the number of table games fell nearly 5 percent.

Rick Medina, assistant director at Arizona Department of Gaming, said the 15 tribes that manage casinos in the state may have cut less-popular games to focus on those where players were risking more money.

"Every square foot of their establishment is ... important to them," Medina said. "Casinos don't want to have games on the floor that people aren't playing."

Ellsworth said the number of people playing one machine or table game will affect revenue, since the number of wins per unit per day tends to drive up the amount of money players bet at that unit.

Casinos are also replacing some machines with "multidenomination machines" that let players change the amount of money they play, Ellsworth said.

"For example, a video poker machine could be played as a 5-cent machine, a quarter machine or a dollar machine," he said. "The casino can offer multiple-denomination games with less machines on the floor."

Alan Meister, an economist with Nathan Associates Inc. and author of the Casino City Press report, said casinos might also be able to increase revenue while cutting the number of games by offering more multiplayer than single-player games.

Medina said confidentiality agreements between the state and the casinos prohibit him from releasing details on exact reasons behind the higher revenue.

In 2012, tribal casinos contributed $84.9 million toward the state budget, according to the governor's Office of Strategic Planning and Budgeting.

Medina said the tribes plan to announce next week that this summer they expect to reach $1 billion in contributions to the state budget, stretching back to the approval of tribal casinos in 2003.