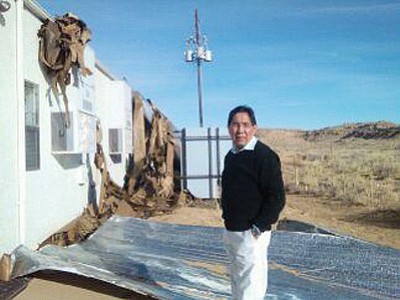 KYKOTSMOVI, Ariz. - Parts of the roof of the Department of Economic Security (DES) building blew off in a sandstorm in Kykotsmovi Village March 30. Now people who need aid must travel to Tuba City or Winslow.

The DES office serves those who need food stamps and nutritional assistance. The building also houses the Hopi Temporary Assistance for Needy Families program and a medical program that also serves people who need assistance because of disabilities.

Elsie Yoyokie, program manager for the north region of DES, said she was relaxing at her house out of the wind when someone banged on her door to tell her that the roof was coming off the building.

The 60 -70 mph wind did not take the whole roof off but the wind tore off the siding that covered part of the roof.

"It actually came off of the south side of the building and landed on the north side," she said. "It reminded me of aluminum foil that was crumbing. That is what it looked like afterward. I couldn't really see because the wind was so strong and the dirt was just hitting my face."

Yoyokie said the building closed the day after the sandstorm hit because there is now a lot of sand in the doors, windows and vents in the building. All the equipment was moved and covered to make sure the sand did not damage the equipment.

The owner of the building is working with her insurance company to get the building repaired. Yoyokie said she hopes to be back in the building by May 1 but there has been no timeline laid out yet.

She said the building closure affects families within at least a 50-mile radius of Kykotsmovi. Yoyokie said Hopi Tribal Chairman Herman Honanie came to inspect the damage because he was concerned that the office closure would affect a lot of people and cause a hardship.

"Most of those individuals are from the Hopi villages and some Navajos who are in the surrounding area," she said. "Those families will have to go to Winslow DES or Tuba City DES office."

Yoyokie has relocated to an office in Flagstaff. Two caseworkers, a supervisor and two clerks are traveling to Tuba City every day.

"We anticipate that clients are going to be utilizing one of the two offices," she said. "I think it may be a little bit closer from Hopi to Tuba City. It is up to them which office they are going to go to to get services."

The DES office also is working with the Hopi Tribe to get bus schedules to the families who need assistance to find times that are convenient for them to travel from Hopi to Tuba City. Further complicating matters, Tuba City is an hour ahead of Hopi.

So far, Yoyokie said the office has not received any complaints and the staff is doing its best to continue to serve the people who need help despite the inconvenience of not having a local office.

"I hope that they understand what has happened and we just have no control over it," she said. "I didn't know the wind could be so strong."

Elsie Yoyokie tells of her years helping people at Arizona DES
Photos: Francisco and Kitchen retire after years of service with state of Arizona
Hopi EDC team off to fast start
Bigman retires from Department of Economic Security after 25 years of service
State of Arizona approves $1.1 million for new Department of Economic Security office in Chinle
Event Calendar