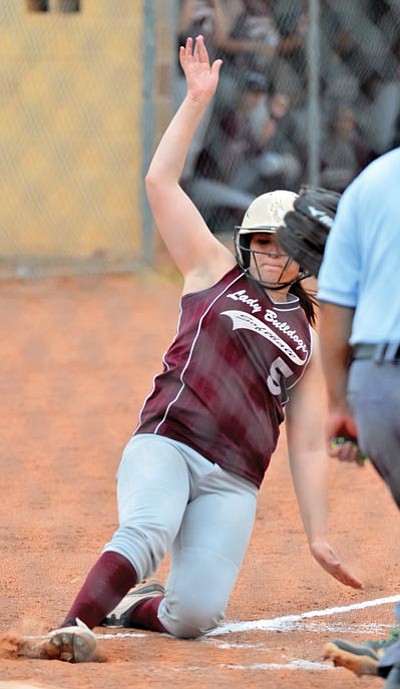 Renee Bollin slides into home plate during the Winslow Lady Bulldogs’ 19-8 win earlier in the season against Blue Ridge. Winslow is 19-0 for the season after wins against Mingus and Round Valley April 1 and 3. Photo/Todd Roth

WINSLOW, Ariz. - The Winslow Lady Bulldogs continued their winning streak last week but the Winslow Bulldogs boys' team lost to Mingus. Both played in tournaments over the weekend.

The Lady Bulldogs softball team remains unbeaten after an 8-5 win over the Mingus Lady Marauders in Cottonwood April 1 and a 5-0 victory over the Round Valley Lady Elks on April 3. The wins were Winslow's 18th and 19th of the season without a defeat.

In the Round Valley contest Taylor Baca got the win working four innings and keeping Round Valley scoreless on one hit and one walk. Richelyn Villanueva worked three scoreless innings in relief and gave up just one hit and a walk. Villanueva was one for one at the plate with a double. Erica Jodie and Baca were both two for three. Liz Lozano and Jaleisa Hayes were two for four with Lozano having a double. Hailee Branson and Katonya Begay were one for two. Sierra Wilcox was one for three.

The Lady Bulldogs will play the Blue Ridge Lady Yellowjackets at Pinetop Friday and host the Globe Lady Tigers on Saturday.

The Mingus Marauders defeated the Winslow Bulldogs 7-5 in a baseball game played in Cottonwood April 1.

Mingus took a 3-0 lead in the second inning on three hits, a walk and two Winslow errors. The Bulldogs cut the margin to 3-2 in the top of the third on an error, a hit batter and singles by Rey Chavez-Velez and Colton Corum. The Marauders got those runs back in the bottom of the third on a triple, a single and a hit batter.

Chavez-Velez and Montoya led the Bulldogs at the plate with two for three days. Cirre and Chacon were both one for three. Corum and Cirre were one for four and Montiel was one for five. The Bulldogs out hit Mingus nine to eight but four costly errors led to four unearned runs and decided the outcome of the game.

The Bulldogs play the Blue Ridge Yellowjackets at Pinetop on Friday and host the Globe Tigers on Saturday.