Uranium settlement to bring $1 billion to Navajo Nation for cleanup
Anadarko Petroleum and Kerr-McGee agree to pay $5.15 billion to multiple claimants to clean up 49 abandoned mines 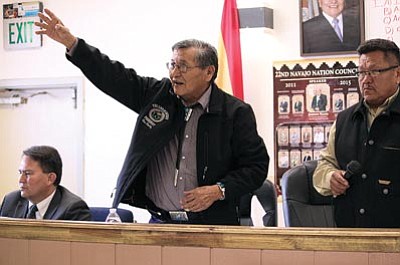 Navajo Nation President Ben Shelly reports to the Dzil Yijiin Regional Council on April 3 at Black Mesa Chapter House that the Nation will receive a $1 billion bankruptcy settlement for abandoned uranium mine cleanup from Kerr-McGee. He said the settlement was a major victory for the Navajo Nation and that the remaining abandoned mines still need money for cleanup. Photo/Rick Abasta

WINDOW ROCK, Ariz. - The U.S. Department of Justice announced a settlement April 3 that will bring billions of dollars to the northern and eastern agencies of the Navajo Nation for uranium mine cleanup.

According to the settlement, Anadarko Petroleum and former parent company Kerr-McGee Corp. agreed to pay $5.15 billion for abandoned uranium mine cleanup on the Navajo Nation.

Approximately $4.4 billion will pay for environmental claims and cleanup for damages for claimants of Tronox. The Nation is one of several claimants in the case, which included 22 states, four environmental response trusts and a trust for tort plaintiffs.

"This settlement was the result of the Navajo Nation's claim against Tronox when it filed for bankruptcy in 2008," Navajo Nation President Ben Shelly said. "We lobby Congress heavily to request funds from federal agencies and that takes a long time. Going into a bankruptcy case demonstrates that we have not stood idle on this effort. The government understands its trust responsibility for cleanup of the legacy uranium mines."

While the settlement will address cleanup at the 49 abandoned mine sites, hundreds more still remain without money for cleanup efforts.

The Kerr-McGee reorganization of 2005 placed decades of environmental liabilities upon Tronox. Anadarko eventually acquired Kerr-McGee and became the parent company of Tronox in the process.

The lead agencies in the settlement agreement were the Navajo Nation's Environmental Protection Agency (EPA) and Department of Justice (DoJ).

For more than three decades, several individuals working for the Navajo EPA Superfund Program contributed significantly toward the landmark settlement, including the late Arlene Luther, Jerry Begay and Eugene Esplain.

Stephen Etsitty, director of Navajo EPA, said the opportunity to file a claim in the Tronox bankruptcy case came in 2009.

"Tronox was overloaded with environmental liabilities from Kerr-McGee," Etsitty said. "They wound up suing Kerr-McGee and Anadarko."

Working for the Navajo Nation since 2005, Taylor brought valuable Superfund cleanup experience to the table and was previously the principal enforcement attorney for the state of Missouri.

"Taylor's efforts to cleanup the dioxin contaminated lands in Times Beach, Missouri in the 1980s and early 90s is commendable. It is still recognized as the largest civilian exposure to dioxin in U.S. history," Etsitty said.

In 2011, staff from the Navajo EPA Superfund gave tours of the Kerr-McGee abandoned uranium mine sites to U.S. Justice Department attorneys in preparation for the trial.

In the summer of 2012, Shelly and Navajo Nation Attorney General Harrison Tsosie testified in New York City for the court case. Etsitty and Perry Charley were selected as witnesses.

Shelly said former tribal leaders were instrumental in providing guidance. He said his administration never gave up and ultimately prevailed.

"I am proud to say ahe'hee to the Navajo people for your patience and prayers," Shelly said. "The settlement will be a great help in restoring the abandoned uranium mine sites, but we must not forget about the 460 other sites still in need of cleanup funds."

The Navajo Nation's litigation team included attorneys from the Chicago firm of Kirkland and Ellis, the Office of the U.S. Attorney for the Southern District of New York, U.S. Justice Department, and representatives from the U.S. EPA in San Francisco.