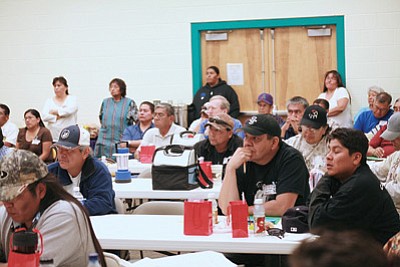 MAN UP, as the event is known, is a two-day event this year from 10:30 a.m. to 5 p.m. on the first day and from 8 a.m. to 1 p.m. on the second day. There will be health screenings for glucose levels and blood pressure. The dental hygiene program at NAU will provide oral health screenings as well.

On April 11, a one-mile prayer run starts from the Hopi Veterans Memorial Center at 7:15 a.m. All are welcome to participate in the open event.

Other local resources from both the Hopi and Navajo reservations and Flagstaff will occupy around 200 booths at the men's health expo to provide information and screenings to anyone who shows up.

Kellen Polingyumptewa, community health representative for the Partnership for Native American Cancer Prevention, said the event is mainly for men to come and talk to each other about health topics that affect them and their local community. While the focus is on Native American men and cancer prevention, there will be other topics and presenters because of the interest from non-Native people as well.

"We work to expose the men to a lot of different issues related to their community and so it is a learning thing for us, but it is a place where they can come and be comfortable to talk," he said. "This is the only event for men out there as far as I know."

Polingyumptewa said that last year between the men and women who showed up, there were about 200 attendees. This year the group is hoping for more.

"Hopefully we're going to get more interest elsewhere," Polingyumptewa said. "We've been getting a lot of interest from other reservations, other programs from around the state of Arizona that want to attend."

"One of the biggest focuses for the program is tobacco education," said Marissa Adams, outreach program coordinator for the Partnership for Native American Cancer Prevention.

April is oral health, head and neck cancer awareness month. The program works with the Indian Health Service as well to work on a referral system for the men.

The two-day event also focuses on working and finding the resources of local Hopi members, Adams said. This year, Waylon Pahona, a founding member of Healthy Active Natives will be on hand as a motivational speaker to the men. There will also be presenters on a variety of mental health services, including post-traumatic stress disorder (PTSD).

"We opened up the floor not only for cancer prevention ... but for other resources to come in and use this platform and convey their message," Polingyumptewa said.

"We have diabetes that affects us. We have mental health, dealing with cancer and how to cope with it. That is part of why we try to introduce mental health into it," she said.

Polingyumptewa said the program is successful as shown by a participation increase and the number of men voluntarily getting screenings.

"You start noticing more conversations," he said. "Their spouses are coming to us and telling us 'thank you for having this for them because they're starting to talk about their health in a different way' or they are making appointments for themselves. We put it in their hands. They can make their choice about their health but we provide an educated and informed setting for them."