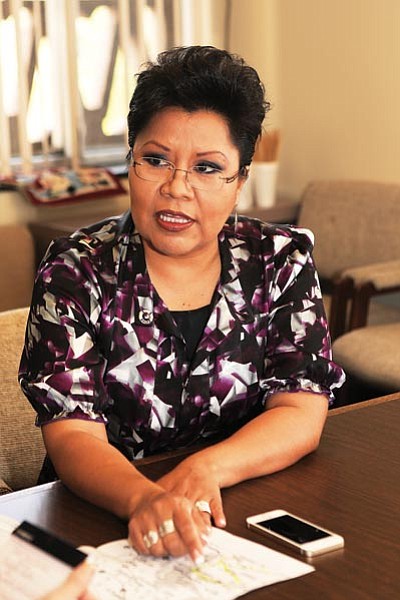 PHOENIX - As a member of the Navajo Nation and an Army veteran, a state representative says Arizona needs to do more to honor Native Americans who have served and sacrificed for their country.

Rep. Jamescita Peshlakai, D-Cameron, said one way to start would be adopting new names honoring Native American veterans for portions of highways that pass through Navajo and Hopi land in northeastern Arizona. They are U.S. 89, U.S. 160, State Route 264 and Interstate 40.

She said the designations would help connect tribes and the rest of the state.

"It really creates a live, real awareness of people that travel those roads when they're there immediately," she said. "It's not just in a textbook, it's just not a number, 89, 160, 264. It's not just a number, it becomes a real life place. It becomes what it is, which is Native American country."

While the measures weren't heard in committee, Peshlakai said she will urge U.S. Rep. Ann Kirkpatrick, D-Flagstaff, to work in Congress to have I-40 between the New Mexico state line and Flagstaff designated as Navajo Code Talker Trail.

Jennifer Johnson, communications director for Kirkpatrick, said that while she couldn't comment on Peshlakai's proposal to the state Legislature the congresswoman supports efforts to honor Native American veterans.

In 2003, former Gov. Janet Napolitano signed legislation to designate I-40 through Arizona as Purple Heart Trail. Peshlakai said she doesn't intend to appear disrespectful to that designation by taking the issue to Kirkpatrick.

"It might just be a small strip between Winslow and Flagstaff, but I just don't know. I would have to really talk with her," Peshlakai said.

Terry Hill, a retired Army command sergeant major who serves as committeeman for the Show Low-based White Mountain Area Veterans of Foreign Wars (VFW), said that while he would love to see Native American veterans honored he wouldn't want the designation Purple Heart Trail removed from any stretch of I-40.

"Somebody would have to really talk to me and give me a good argument for the VFW to support it," he said.

Hill said designating part of the road as both Navajo Code Talker Trail and Purple Heart Trail might be acceptable.

"I do support all veterans, men and women because I have veterans in my family," he said.

"He's definitely a major supporter and stands behind the Navajo Code Talkers," Abasta said. "Anything that would honor them in that way would certainly be a blessing."