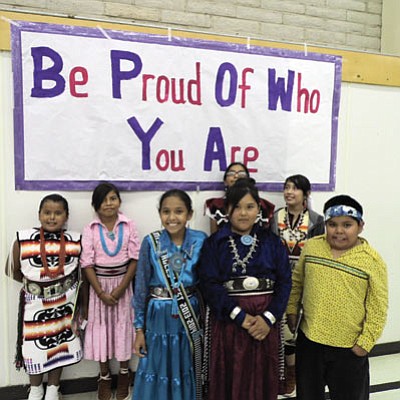 From Tuba City Primary School to the Tuba City High School, each day had a theme including traditional moccasin day, traditional hairstyle day, Native clan day and traditional dress day. Students prepared traditional foods and took part in several royalty pageants for all grade levels that focused on knowledge of one's Native traditions, including speaking fluently in their own tribal language. The winners represent their school for the school year at tribal events.

The United States recognizes American Indian Heritage Day on the Friday after Thanksgiving. Only Maryland observes the day by closing government offices.

But that does not stop Native school districts across the country from celebrating Native American heritage, history and vital Native contributions to the United States during the month of September.

Many of the activities encouraged parents, grandparents, aunts, uncles and community members to participate. These family members have extensive knowledge of their own tribal traditions, which made the week long activities more meaningful.

The school cafeterias prepared traditional foods to remind students of foods that most modern day native families still prepare at home, such as corn, mutton and traditionally prepared breads. These foods use summer crops like beans, squash, chilis, tomatoes and melons.