Standin' on the Corner Fest Friday and Saturday in Winslow
15th annual event to feature two days of music, food and vendors in historic downtown Winslow 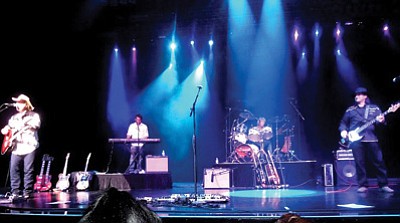 Eagles tribute band Desperado will take the stage Saturday at 8 p.m. at the Standin’ on the Corner Festival in Winslow. Submitted photo

Winslow plans to take it easy this Friday and Saturday with the 15th annual Standin' on the Corner Park Festival. The event features two days of music, food, drinks, a mayoral speech, a live auction and a variety of other entertainment and activities for event-goers of all ages.

Desperado, an Eagles tribute band, will headline Saturday night's band line up. They take the stage from 8-10 p.m. Northern Latin Express will close out the festival from 10 p.m.-1 a.m.

The festival begins at 10 a.m. on Friday with games, kids rides and a variety of vendors.

The Tommy Dukes Blues Band kicks off the musical portion of the festival at 5 p.m. The Plateros, an original blues rock band, play from 8-10 p.m. fresh off an appearance on the David Letterman Show. Johnny Johnson and the Loose Change Band close out Friday night's performances from 10 p.m.-1 a.m.

The festival began in 1999. Tom McCauley, a member of the Standin' on the Corner Foundation, said there were 12 people on the foundation board when the first festival took place. The inaugural event coincided with the unveiling of a mural and statue in the park. The Kaufman family donated the property where the park is located.

The festival is designed to promote Winslow. The foundation is a 501c3 non-profit.

"The mission of the foundation is to promote business and economic development in historic downtown Winslow and Winslow as a whole," McCauley said. "A lot of people don't realize what is available in Winslow."

With the city's approval, the foundation began fundraising to build what is now Standin' on the Corner Park to attract visitors to Winslow.

"Which it certainly does," McCauley said. "We're way there. At the same time we're working to promote Route 66 in Winslow."

The well-known single "Take It Easy," written by Glenn Frey and Jackson Browne, became a hit in the 1970s for the Eagles and put the community of Winslow on the map. The verse "standin' on a corner in Winslow, Arizona" draws visitors from far and wide to stand on that famous corner on Historic Route 66.

Other acts on Saturday include Mexican folk dancers NPC Ballet Folklorico at 10 a.m. and Steven Padilla from 2-4 p.m. among many others.

The Standin' on the Corner Auction takes place at 4 p.m. and features a wide variety of items up for bid. A professional auctioneer will be on hand to auction off all of the goods.

McCauley said all the items come from Winslow businesses. Items include small refrigerators, televisions, a guitar from the Eagles and more.

After Saturday's auction, the party resumes at 6 p.m. with Brenda and Mary Alice Hayes' Sounds of Faith. Desperado will rock the pavilion at 8 p.m. followed by Northern Latin Express from 10 p.m.-1 a.m.

"I can confidently say that Desperado is without a doubt the hardest working and best sounding live Eagles tribute band out there," McCauley said. "They are amazing. The Northern Latin Express will close the show. We'll be doing cumbias and chantas all night long on the dance floor. It should be fun."

The event is $2 per person per day. Children younger than 10 are free. The foundation will use the money to continue work on Eagle Pavilion and the park.

McCauley said phase 1 of the stage project at the park is complete. Work in Phase 2 and 3 will include building a stage cover and doors.

"That's going to be awesome when we're done," he said. "It will be a full sized regulation stage that you would see at any concert anywhere."

The foundation hopes to build stadium seating, gazebos and a covered vendor area.

"So when we go in to do an event, and it doesn't matter if that event is a class reunion or family reunion or a Boy Scout jamboree or the Standin' on the Corner thing, it's a community venue," McCauley said.

Over the years, thousands of people have visited the park, which features a mural by John Pugh and a life-size bronze sculpture by Ron Adamson. The artworks depict the story behind the song and are supplemented by multi-level planters with built-in seating, native landscaping, trees and lighting

The park includes inscribed bricks sold by the Standin' on the Corner Foundation, allowing purchasers to have a permanent spot on the corner in Winslow, Arizona. The sales of these bricks have made the building and upkeep of this park possible.

More information on the festival, the park, and a full list of this weekend's performances and activities is available at www.standinonthecorner.com or www.winslowarizona.org.