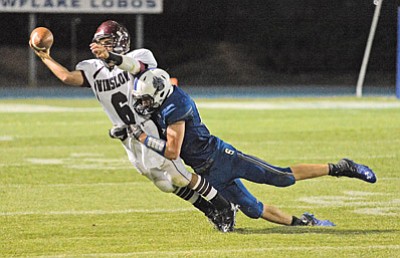 Winslow quarterback James Martinez tries to get rid of the ball during the Bulldogs’ loss to Snowflake Sept. 20. Photo/Todd Roth

SNOWFLAKE, Ariz. - The Snowflake Lobos topped the Winslow Bulldogs 46-14 in a football game played in Snowflake Sept. 20. The win improved Snowflake's record to a perfect 3-0 for the season and dropped Winslow's to 2-2 for the season.

Winslow missed four-year starter Henry Montiel, a talented receiver, running back and defensive back. Jace Hardy replaced him on offense and turned in an outstanding performance. The Bulldogs played hard but the tough running attack of the Lobos was too difficult to handle.

The Bulldogs started with a 13-play, 67-yard drive to score on a two yard run by James Martinez. The conversion by Rodney Davis gave Winslow a 7-0 lead with almost half of the first quarter gone. Running by Kelly Wood and Hardy and passing plays from Martinez set up the score.

The Lobos drove 68 yards on eight plays to score on an 11-yard run by Rubon Caldwell. Winslow blocked the conversion. Winslow led 7-6 with less than four minutes left in the quarter.

Ty Reidhead ran 40 yards for a Snowflake touchdown the next time the Lobos had the ball. The run completed a 53-yard drive. The conversion by Kegan Kay gave the Lobos a 13-7 lead as the quarter ended.

The next time Snowflake had the ball, Reidhead ran four yards for his second touchdown of the game. The conversion failed and the Lobos led 19-7 with nine minutes of the second quarter left to play.

After a Winslow fumble, Reidhead passed 40 yards to Rick Shumway to score. The two-point conversion failed and Snowflake led 25-7 with more than eight minutes left in the half.

Wood ran four yards for a Winslow touchdown nearing the end of the first half. A 30-yard pass from Martinez to Wood was the key play of the drive. Davis converted to cut the Snowflake lead to 25-14.

The Lobos scored on their first possession of the third quarter as Reidhead ran three yards for the touchdown to complete a 65-yard drive. The conversion run failed and the Snowflake lead was 31-14 with most of the second half left to play.

Winslow drove to the Lobo nine-yard line where the Lobos stopped the drive on downs with about half of the third quarter left to play.

C.J. Chacon intercepted a Snowflake pass near the end zone in the final seconds of the third quarter, which ended with Snowflake leading 31-14.

Reidhead intercepted a Winslow pass at the Bulldogs' eight-yard line. Nik Hall scored on an eight-yard run on the next play, and Reidhead ran for the two point conversion for a 39-14 Snowflake lead with most of the fourth quarter left to play.

Shumway ran 17 yards for a Snowflake touchdown midway through the final period. Kegan Kay booted the conversion to increase the lead to 46-14.

Still playing hard, the Bulldogs drove to the shadow of the Snowflake goal post where the Lobos stopped them on downs. Snowflake ran out the clock to end the game with a 46-14 victory.

The Bulldogs will play the Estrella Foothills Wolves on Friday to end a three game road trip. Snowflake will play the Monument Valley Mustangs at Kayenta on Friday and will have a huge game against the Blue Ridge Yellowjackets at Pinetop in two weeks.